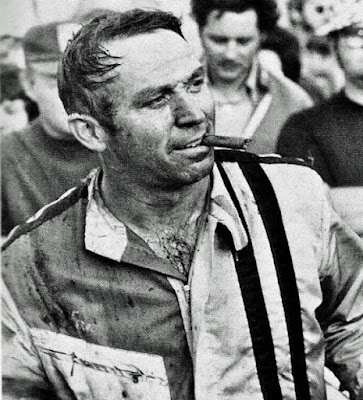 Vern Schrock chomps on a cigar after a hard-fought battle to win the Dri-Powr 400. – Wayne Doebling Photo

Bill Bielby of Flint, Mich., was taken to a local hospital with second- and third-degree burns on his hands and neck as a result of a fiery eight-car mishap early on in the race.

The fuel tank on Bielby’s Chevelle exploded after being struck by the car driven by Larry Moore of Hamilton, Ohio. Bielby was the only driver injured.

The accident, which halted the race for 52 minutes on the 22nd lap, was triggered by John Anderson’s spin. Anderson’s car was struck by the one driven by Moose Myers, Fort Wayne in the fourth turn. Bielby came upon the accident and slide up the bank trying to avoid the spinning cars. He was then hit by Moore’s car. Cars driven by Ron Hutcherson of Keokuk, Iowa and Bill Wyrick of Gas City, Ind., slammed into the cluster of wrecked cars as Bielby’s fuel tank burst into flames.

Quick and determined efforts by the Winchester Speedway fire and safety crew beat down the flames before they engulfed other cars.

Ed VanderLaan of Grand Rapids, Mich., started from the pole position after a world record qualifying run on Saturday and held a narrow lead for the first 114 circuits over Don Gregory of Columbus, Ohio and Tom Maier of Midland, Mich.

Maier took over on lap 115 and led through 160 until he pitted, surrendering the top spot to Don Schoenfeld of Fort Smith, Ark. Maier came back to lead laps 199 and 200, but pitted again and VanderLaan resumed the top spot on lap 201.

The fast-moving VanderLaan, who qualified at 17.93 seconds on the high-banked half-mile asphalt oval, blew the engine in his Chevelle on lap 232, yielding the lead to Cushman. Cushman held on until he pitted on lap 290. Schrock took over at that point and never relinquished the lead for the rest of the contest.

Both former winners of the Dri-Powr 400 were in the field but succumbed to mechanical ailments. Dave Sorg, winner of the 1970 and ’72 races, wound up 26th and Dennis Miles, the ’71 champion, was 24th.