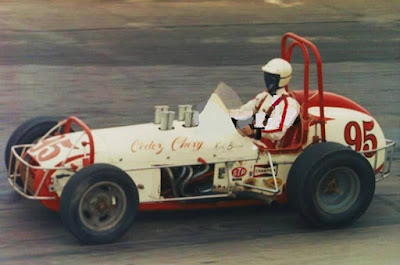 Busson, of Oregon, Ohio, took the lead on the first lap and never looked back. Driving a Chevy-powered car, Busson increased his point margin over Jerry Richert by some 350 points as Richert finished in the runner-up spot. Richert, a three-time national champion, never gave up, staying on Busson’s bumper the entire race.

Two cautions were the only things that kept Busson from setting his second record of the night. He won the 10-lap dash in a record-setting 3 minutes and 29.26 seconds. That broke the old mark of 3 minutes and 29.76 seconds set by Dick Gaines in 1964.

Gaines, who finished third in the feature, still has something to lean back on, however, as he set a new one-lap qualifying record time of 19.76 seconds.

An estimated crowd of 6,350 saw Charlie Masters and Don Brown fill out the top five, respectively, of a starting field of 18 cars.