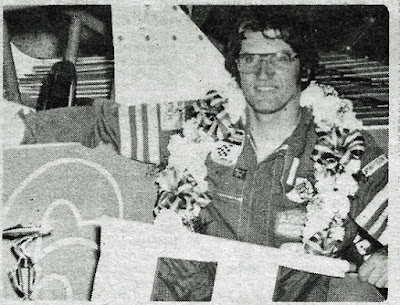 Hinsdale, Ill. (June 16, 1984) – Gary Webb of Davenport, Iowa, was all grins on the winner’s stand Thursday night at Santa Fe Speedway. From the start to the finish, polesitter Webb led the Dixieland Challenge 50-lap race on the quarter-mile.

Competition was tough, as some of the best dirt late model drivers in the Midwest teamed up with Southern-bred Bobby Allison and Buddy Baker.

The first caution appeared as Ken Pohlman spun out on the second lap. The caution tightened the gap between Webb and Jim O’Conner, in second position, but not for long.

The yellow appeared a second time on the fourth lap, once again pulling Webb back into the pack. The flag waved for Dennis Erb and Buddy Baker as they collided in the fourth turn.

Shortly after the green reappeared, Webb shot into a strong lead, which he maintained throughout the endurance of the contest.

On lap 18, with Webb in the lead and Darrell Marmor holding onto a strong second, an awesome battle for third-place ensued between O’Conner and Al Johnson. O’Conner and Johnson drove door-to-door for eight laps until Johnson finally secured the position on lap 25.

Not ready to settle for a third-place finish, Johnson drove on Marmor’s tail by lap 32 and stole second position two laps later. The top seven racers maintained their positions throughout the rest of the race.

Johnson crossed the finish line in second behind Webb. Marmor settled for third with O’Conner in fourth and Tony Izzo and John Provenzano following. Bobby Allison finished a respectable seventh.

7. Bobby Allison, Hueytown, Ala.
No comments: 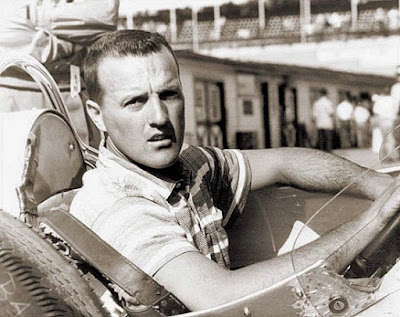 If it holds true for 22-year-old rookie A.J. Foyt of Houston, Tex., he may realize that his #1 ambition to someday win the Indianapolis 500-mile race.

Foyt, driving for the first time on a banked track, roared across the finish line to capture the 30-lap feature race sanctioned by the International Motor Contest Association (IMCA).

He steered his 270-cubic inch Offenhauser-powered sprint car home ahead of Bob Cleburg of Rio, Wis., another driver with championship-car ambitions. Cleburg’s Offenhauser has a 220-cubic inch piston displacement.

Marvin Pifer of Lansing, Mich., beat out Al “Cotton” Farmer of Fort Worth, Tex., for third-place.

Foyt, a Houston garage owner, who has been driving for about five years, had won only one feature in sprints before Sunday afternoon. His first triumph came in the summer of 1956, winning an IMCA-sanctioned race at Fargo, N.D.. He also had two third-place finishes and a fourth-place showing in his first season with IMCA sprints.

Foyt, who hides his names, Anthony Joseph, with his initials, ranks in the top-10 in the United States Auto Club midget standings. He recently won a 100-lap race on dirt in Kansas City.

The car Foyt drove to victory lane was owned by Les Vaughn of Omaha, Neb.

Foyt led for the first 10 laps until Cleburg overhauled him for the top spot. Foyt finally got back in front again only four laps from the finish. Pifer passed Farmer on lap 21 to claim the third spot.

Salem promoter Russ Barnard remarked that despite a turnout of only 2,500, that another IMCA event would take place in July.

1971 – Mueller Blazes to Victory in Invitational 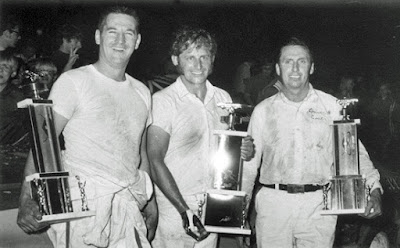 Roaring from the third row of the 28-car, 40-lap feature, Mueller, laying it on his 1970 Monte Carlo, took the lead on the 13th lap and was pulling away at the finish.

Phil Prusak made it a 1-2 local finish when, unable to cope with Mueller’s triumphant dash to the wire, he finished second and took home $450. Cecil Henderson, Dakota, Minn., hung in there all the way to take home the $350 third place money.

But the story of the race, held on a balmy evening with temperatures in the 70s and a crowd of more than 2,000 fans looking on, was Mueller.

The popular and talented driver, deservingly respected as one of the top drivers in the Northwest strictly a battle between Mueller, Prusak and Jusola.

When Jusola suffered a flat tire while running second on the 27th lap, Prusak moved into the challenging position only to see Mueller pull steadily away.

By the 30th lap, Mueller had stretched his lead to a half lap, and he widened the margin to three-fourths lap seven laps later and eventually won by that margin.

Winning on the Eau Claire track is nothing new to Mueller, who is the season point leader and a former Late Model Invitational champion.

Only I0 of the original 28 cars finished the feature, all placing in the money.

Nesbitt was the winner last year and started the feature alongside Mueller in the third row Tuesday night only to slip back and finally be lapped by the leaders. 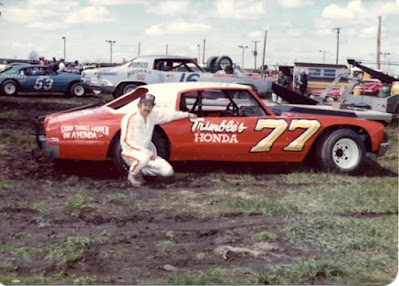 Cresco, Iowa (June 14, 1974) – Dave Bjorge continued to hold a firm grip on the late model feature event at the Howard County Fairgrounds, capturing the Spring Championship stock car title Friday night, his second win in as many races on the Cresco dirt oval.

Starting toward the rear of the pack, Bjorge moved into the fourth slot, on the eighth lap, and passed two cars on the next lap to assume second place in the 16-car field on the ninth lap following a restart.

The veteran Austin, Minn., driver was held off by New Hampton, Iowa’s, Ken Ferrell for the next two laps before Bjorge squeezed on the inside to take the lead and hold it for the remainder of the 25-lap feature.

The late model feature was marred by a crack-up on the grandstand straightaway when Gerhart Wollenburg of Austin, Minn., spun-out on the fourth turn and was hit broadside by Ron Kester of Brownsdale, Minn.

Both drivers escaped injury, but the two were forced from the race. Wollenburg was holding third place at the time of the crash, and Kester was fifth. 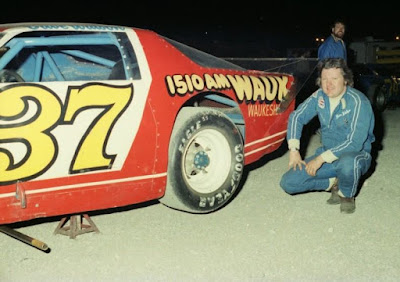 Kaukauna, Wis. (June 13, 1982) – Dave Watson’s Firebird could do nothing but go fast Sunday afternoon at Wisconsin International Raceway, as he wheeled the car to a quarter-lap victory in the first race of the Old Style Red, White & Blue State Championship Series before a crowd of 6,712.

Watson took the lead on the 34th lap as he slipped past Steve Burgess for second place and leader Ton Reffner ducked into the pits at the same moment with engine problems after setting a torrid pace during the early portion of the contest.

Willie Goeden put his car into the early lead and raced wheel-to-wheel with fellow front-row starter Kevin Stepan. Reffner roared past Goeden along the backstretch on the fifth lap while Burgess moved into second on lap 6 and J.J. Smith tucked himself in behind Burgess on lap 7 to hold down third spot.

Reffner smoothly eased to a six-car length lead over Burgess and Smith by lap 25. Watson, meanwhile, made his move and overtook Smith for third on lap 27 and then moved past Burgess on lap 34 as Reffner fell out of the event with mechanical problems. 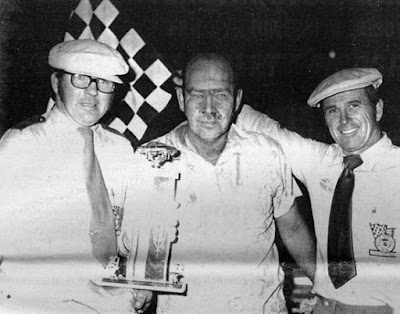 Connolly took an early lead on the fourth lap, being challenged by Ron Weedon of Pleasant Valley, Iowa, for the entire early portion of the race.

Weedon passed Connolly on the backstretch on the 27th circuit and a three-car battle ensued between the two drivers and Jim Tobin of Hudson, Ill.

Connolly lost his windshield on lap 55 and was forced to the pit area with Weedon taking control and Tobin settling into second. A flat tire on lap 68 pushed Weedon to the sidelines, allowing Tobin to move into the lead for the first time.

On lap 70, Tobin’s engine began to overheat, helping Connolly to open up a commanding lead and breezing to the win. Just eight cars finished the race. 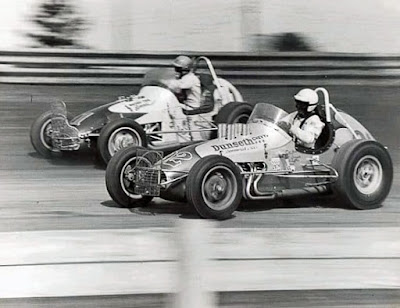 Unser led the first feature from the first lap and was leading in the second feature race when his engine blew on the 17th lap. Weld finished second in the first race and took over the lead in the second when Unser dropped out.

Top qualifying time of the day was posted by Bud Tinglestad with a time of 23.39 seconds. Johnny Rutherford holds the record for the fastest qualifier for sprinters at the Action Track — 22.76 seconds.

No times were posted for any of the races Sunday afternoon as the yellow light was flashed during each race due to spins.

Roger McCluskey holds the winning time for a 30-lapper at the local track — 12 minutes and 14 seconds, set in June of 1963. McCluskey, the Tucson, Ariz., driver who made a clean-sweep of the Twin-30's at the Action Track in 1966 was entered for Sunday's events but was unable to get to Terre Haute from Le Mans, France, where he competed in the 24-hour road race, in time for the action here.

Jim Hurtubise, making his first start in sprint cars since his accident in a big car race at Milwaukee on June 7, 1964, experienced trouble in his qualifying runs when his racer began spewing oil. However, he took over the auto driven by Tingelstad in the first feature event, and although starting in last place in the second 30-lapper, pushed it to a sixth-place finish. Johnny Rutherford, sidelined last year with racing injuries, qualified with a time of 25.34 seconds, then ran into trouble in the semi-feature when he blew a tire on the fourth turn. He was out of competition for the day.

In the first feature of a long afternoon of racing, Tinglestad was on the pole with Unser on the outside. Lined up behind the pair were Weld, Thomas, Frank Secrist, Wib Spaulding, Sonny Ates, Chuck Booth, Bob Wente, George Snider, Ralph Liguori, Bill Puterbaugh, Rollie Beale and Jerry Daniels.

Thirty-four cars qualified for the action during the afternoon.

About 8,000 fans were on hand for the day’s action. Some grew a bit impatient because of a long delay between the semi-feature and first feature event as track crews tried to iron the track out with water to improve running conditions and establish a safe track with a good “cushion.”

An official out to check Rutherford's spin in the semi-feature provided onlookers with a chili when it was left unattended on the top of the fourth turn and started to roll down into the path of the racers who were driving under a yellow flag. An unidentified spectator vaulted into the vehicle and drove it away from the path of the race drivers.

Unser and Weld, besides receiving their winning purses, were awarded kisses by Janice Cruse, the "500" Festival Queen, and each received a .30 caliber rifle.