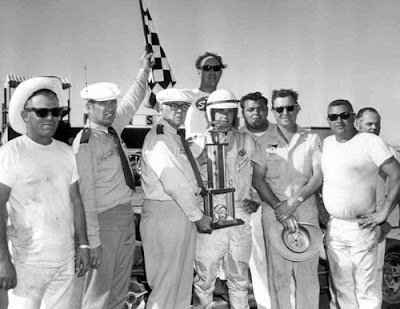 Lincoln, Neb. (September 6, 1970) – Ron Perkins had a big ace in the hole in the big sprint car race Sunday afternoon at the Nebraska State Fairgrounds.

He had the pole position and led from start to finish in the 25-lap feature which netted him and his “Corn Belt Chevy” the top prize of $600.

“I guess I had time to get tired up,” Perkins said, referring to the obvious inability for most drivers to pass on the track, which was rained out on Saturday.

“The fastest times were certainly a detriment today,” the Wood River, Ill., carpenter admitted. Fifth and sixth best qualifying times made for a hot setup.”

Perkin had the best setup, qualifying sixth fastest with a 25.81 second one-lap clocking. That placed in the 6-lap STP trophy dash where he finished fourth.

He hadn’t qualified in his 8-lap heat race, so Perkins was placed in the 10-lap consolation race.

Perkins qualified with a third-place effort, making the 1968 International Motor Contest Association rookie-of-the-year the only four-race driver for the afternoon.

“I don’t think I could have passed many drivers in the feature today,” Perkins confessed. “Most tracks are a little tackier than this one, and it’s just hard to pass.”

“When you start up front on a dry, slick surface,” he continued, “a guy can hardly get you in the turns. A good driver should be able to stay ahead.”

And that’s exactly what Perkins did, making it impossible for second place finisher Eddie Leavitt of Kearney, Mo., or hometown boy Joe Saldana to pass.

Perkins zipped off the 25 laps in 11 minutes and 15 seconds, almost 3 minutes better than the old mark but a red flag nullified any chance of a record.

Bill Utz of Sedalia, Mo., steered his Hathman Chevy to a 24.11 second fast time in one-lap qualifying. Thirteen cars were bumped from the competition after time trials as a record 45 entries participated in the program.

Perkins, who had been consistently finishing “fourth or fifth” this season had not won a feature yet. He won only once last year, at the Kansas State Fair in Topeka.

“I’ve run better races finishing second or third than I did today,” he confessed.

Saldana won the match race, Ray Lee Goodwin of Kansas City won the consolation and Bill Utz of Sedalia, Mo., set a new track record in time trials with a 24.11 second clocking on the half-mile.