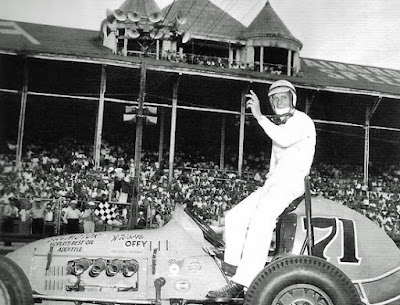 Nashville, Tenn. (September 24, 1960) – A.J. Shepherd proved once again that the half-mile Tennessee State Fair racetrack belongs to him as he roared to his fourth straight victory in the International Motor Contest Association big car contest.

The standing room only crowd of 11,000 cheered Shepherd as he crossed thee finish line but turned loose with a tremendous standing ovation for the runner-up, Johnny White.

Shepherd may have been the winner, but White was the hero. He started last, in the 15th position. It’s doubtful anyone had their eyes on anybody but White from the time starter Al Sweeney dropped the green flag, until he waved the checkered.

White, who had earned the right to start on the pole position with a record shattering performance in times trials, lost the right when he spun out in his heat race. Not finishing his heat race barred him from starting in the feature but with the capacity crowd encouraging Sweeney to “bend the rules”, White was allowed to start at the rear of the field.

In the first heat, White spun high on the embankment of the first turn, tearing up almost everything under his car. For the rest of the afternoon, White’s crew worked feverishly to get the car running again.

Once on the track, White was a driving maniac with one thought in his mind; To win.

Did the last place start discourage him”

“Heck no, you can always win a race, no matter where you start,” White replied, who was being mobbed by spectators after the race.

Even Sweeney admitted afterwards it was the second best race he’s seen in 25 years. Bert Hellmueller started 16th in a race at Tampa once and won the race. “If Johnny had won this, it would’ve been the best,” Sweeney said.

“I couldn’t imagine who that was coming so hard,” Shepard said as he and White exchanged congratulations.

Most of the crowd felt that with three more laps, White may have won the race. “Time just ran out on me,” White remarked.