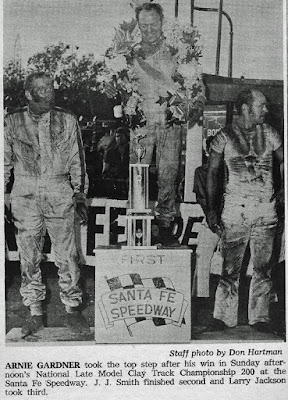 Moving to the front on lap 23 and never even challenged to the checkers, Gardner lapped the entire field save runner-up J.J. Smith of Appleton, Wis.

Picking up $2,000 of the $6,400 purse, Gardner turned the hotly competitive event into a routine Sunday drive in the country.

Sixty-three late models qualified for the title with 31 moving directly into the 100-mile main event. Winners of two semi-mains moved into the tail of the field for the field.

Smith would prove to be the fastest in qualifying with a lightning quick 20.07 second tour of the half-mile oval. Joining Smith on the front row was Jim O’Conner of Kankakee, Ill. Gardner and Karl Sanger of Waterloo, Iowa, sat on the second row.

O’Conner would set the early pace with Gardner and high-flying Al Johnson of Justice, Ill., slicing and dicing for the second spot.

O’Conner’s usually mechanically perfect Camaro began sputtering and limped into the pits on lap 23 – an early spectator. Gardner would take his cue from there and never look back.

Late in the race the crowd took interest in the battle for second between the Wisconsin ace Smith and local favorite Johnson. Johnson would bust a tie rod and crept game fully around the track until retiring with five laps to go giving Smith runner-up honors.