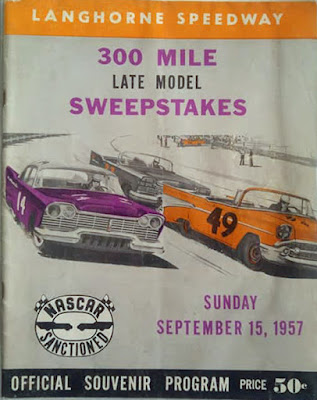 Langhorne, Penn. (September 15, 1957) - Mechanical difficulties forced four of the top drivers in the nation out of the 300-mile Grand National championship sweepstakes— open to late model sedans and convertibles—and a virtual unknown romped to victory in record-breaking time, at Langhorne Speedway on Sunday afternoon.

Fireball Roberts, Goldsmith, Bill Amick and Jim Reed each held the lead at different intervals during the first 210 laps. In turn, each dropped out of the contest with car troubles. Staley took over near the 200-mark and led the rest of the way.

The big surprise of the race was the fact that a new speed standard was set even though the caution flag was dropped five times.

Goldsmith, who turned in the fastest clocking at Saturday’s time trials, and Roberts the runner-up, put on a private dual for the huge crowd, estimated at over 20,000. The pair roared around the Route One oval at speeds in excess of 90 miles per hour.

Staley had a little trouble after that. The winner started from 26th position and slowly but surely advanced his way, position by position, to the winner’s purse.

Dave Terrell, of Newtown, turned in what was probably his best performance at Langhorne. Starting from 23rd position, Terrell fought his way up to sixth place. He drove a ’57 Chevrolet convertible.

Marvin Panch was the luckiest and unluckiest driver of the day. He hit the fence on the fourth turn of the 85th lap. He escaped without a scratch. His car was towed to the pits. After some furious work by his pit crew, Panch re-entered the race. But, engine trouble kept him in the pits most of the afternoon.

On the 165th lap, Al White blew a front tire on the first turn and barely missed being hit by on-coming traffic. Twenty laps later, Tiny Lund and Speedy Thompson both this the fence between the first and second turns. Neither driver was hurt, but both cars were badly damaged.

Neil Castle dropped out on the 245th lap when the gas tank on his car fell off.

Lee Petty’s pit crew turned in one of the best jobs of the day when it changed an axle in six minutes.