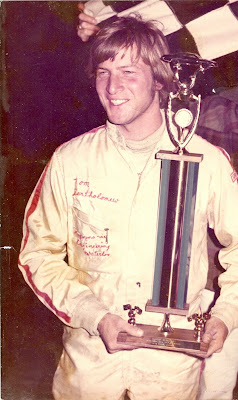 Bartholomew, returning from a clean sweep victory in a special event in Denver, Colo., on Saturday night, collected $500 for stopping off in Omaha, and winning the 50-lap late model main event.

Bartholomew went low under pole sitter Bob Kosiski on the fourth corner of the 23rd lap and took the lead from the Sunset Speedway point champion for the eventual win.

Bartholomew barely made the race by finishing fourth in his heat, and then had to work his way through the field from his 15th starting position in the 22-car field.

Defending champion Kent Tucker of Aurora was running a strong third early on but smacked the wall hard on lap 7.

Both modified and super-modified winners Larry Molzen and Lonnie Jensen led from start to finish in their respective features and also won their heat races.

Finishing behind Jensen was Garry Frantsen of Windom, Minn., and behind Molzen, the point champion in Sioux Falls, S.D., this season, was Bobby Layne of Kansas City.

The fourth annual event was the most successful with a total of 83 cars (41 late models, 24 modifieds and 18 super-modifieds) competing in a 14-event program that brought the top drivers in from all over the Midwest.

A crowd of 1,810 braved the chilly weather to witness an outstanding card.

Jan Opperman, the defending super-modified champion, was expected to compete but due to an accident that hospitalized him, he was unable to attend.