Happy Holidays to all of our 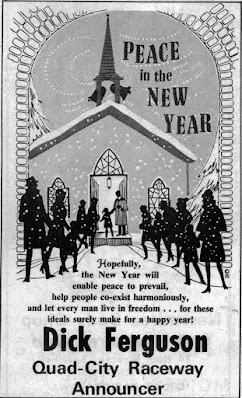 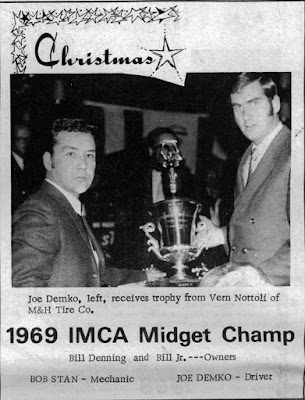 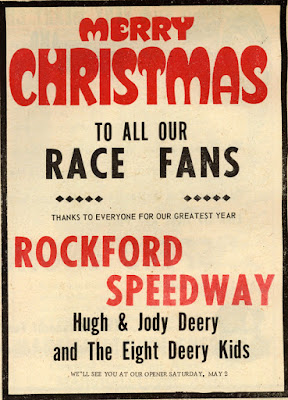 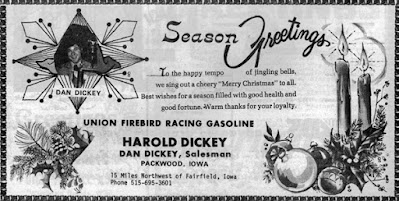 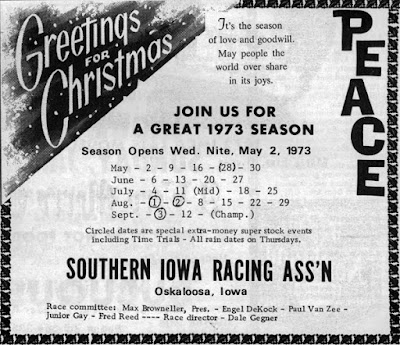 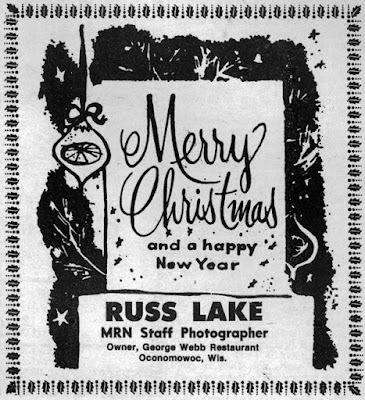 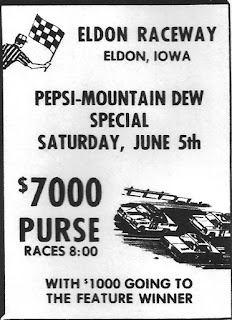 Eldon, Iowa – From 1976 to 1981, it was Eldon Raceway’s marquee event of the year, drawing the top late models from not only Iowa, but the Midwest…The Pepsi-Mountain Dew Special.

Mahaska Bottling Company of Oskaloosa, Iowa, distributors of Pepsi and Mountain Dew in the area and the Wapello County Fairboard were co-sponsors of the event.

The inaugural race would take place on June 5, 1976 with beautiful weather, perfect track conditions and $7,700 purse. The 30 Late Models that entered through the pit gate would compete for a $1,000 top prize.

The 30-lap main event didn’t disappoint with three different leaders in the race. Don White of Keokuk, Iowa, no stranger to racing in the southeast corner of the state, took the lead at the drop of the green and would lead the first 16 circuits with Roger Dolan of Lisbon, Iowa, hot on his heels.

Dolan would slip past White the following lap and begin to build a couple of car-length lead. A few laps later, a hard-charging Ed Sanger of Waterloo, Iowa, would get by White as well. Sanger would spend the next few laps trying to narrow the gap between himself and Dolan. 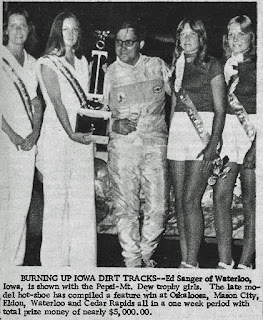 On lap 24, Sanger would be right on Dolan’s bumper and a lap later, power inside of Dolan to take the lead. Sanger would extend his lead after that, never looking back and taking home the first-place money.

Dolan would settle for second while White held on to finish third. Ron Jackson of Burlington, Iowa, and Curt Hansen of Dike, Iowa, would round out the top five finishers.

Kenny Fenn of Washington, Iowa, won the accident-marred Sportsman feature. The extra prize money seemed to make the drivers throttle happy as only seven drivers of the original 16 starters were able to finish the 15-lap race.

The first annual Pepsi-Mountain Dew Special was hailed a success with the Ottumwa Courier reporting, “Eldon’s population is 1,300 but that figure at least quadrupled with this event.”

Weather would be a factor for the second annual Pepsi-Mountain Dew Special on May 21, 1977. Rain had threatened all day, but not much had fallen of the track. But, with the high, gusty winds, it made the racing surface hard, dry and slick. 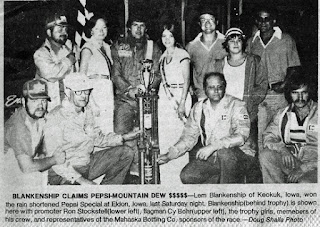 Sprinkles would come around lap 18 and on lap 21, the rains came, putting a halt to the action. After some waiting, the race was declared official with Blankenship the winner.

Jackson would take second with Ken Walton of Cedar Rapids earning third. Bob Kosiski made the trip from Omaha and grabbed fourth while Tom Bartholomew of Waterloo took fifth.

The conditions of the track made it very particularly challenging for the drivers and numerous spinouts made for exciting heat races. Heat winners were Steve Fraise of Montrose, Iowa, Bob Kosiski and Fred Horn of Marion, Iowa. Ken Walton led all six laps in winning the Australian Pursuit and Bill Zwanziger of Waterloo was the consolation winner.

Ed Pilcher of Ottumwa, Iowa, no stranger to the half-mile track, had no problems negotiating the dirt oval, making his way around five cars to take the lead halfway through the 15-lap Sportsman feature to capture the top prize.

Named Iowa’s “Driver of the Year” for 1977, Curt Hansen of Dike, Iowa, had already gotten off to a rousing start when the 1978 season began. Hailed as the hottest driver in the Hawkeye state, Hansen was the overwhelming favorite when the third annual Pepsi-Mountain Dew Special took place on May 23, 1978.

Starting in the third position, Hansen would power past front-row starters Pete Parker and Don Hoffman on the first lap and then proceed to lead the remaining 49 laps to collect the $1,000 winner’s check.

Hansen’s only challenge came from his car owner and 1976 winner, Ed Sanger. Sanger, who started 19th in the main event, quickly made his way to the front of the field and challenged Hansen for the lead before losing steam in the waning laps.

In fact, at one point, Sanger-built (and owned) cars were running in the top three with Verlin Eaker of Mechanicsville, Iowa, also in the mix early on before making contact with the fence and retiring to the pits.

Finishing behind Hansen and Sanger would be a pair of Des Moines drivers, Don Hoffman and Joe Merryfield, with Ken Essary of Galena, Mo., rounding out the top five. 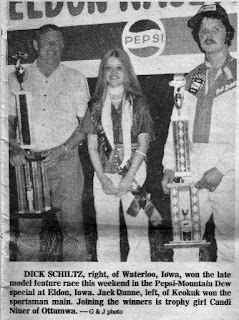 When the fourth annual Pepsi-Mountain Dew Special took place on June 30, 1979, there was no clear-cut favorite for that year’s race. But of the 36 Late Model pilots competing, several drivers were performing at a high level.

Bill Zwanziger had just won the Coca-Cola Special at Tunis Speedway the previous Thursday. Defending champion Curt Hansen had also just won a big race in Des Moines the previous week, the Futurity 100. Mike Niffenegger of Kalona, Iowa, was a weekly competitor at Eldon and had already won five features that year.

Also competing was a driver from Waterloo, who had yet to win a feature but surprisingly was the point leader at the Wapello County Fairground track. Dick Schiltz had been consistent all season long but still hadn’t gotten over the hump in the win column. That would all change…

Mike Niffenegger would take the lead from his pole position and set a blistering pace, leading the first five laps. He would suddenly lose power, and drop back to third, giving the lead to ’77 winner Lem Blankenship, followed by Schiltz.

Blankenship would separate himself from the rest of the field and by the halfway point, possess a half-lap margin. But Blankenship would lose power as well, and with only 10 laps remaining, pull his car to the infield.

Schiltz would inherit the top spot at that point and have to fend off Dolan in the final laps. With the capacity crowd on their feet, Dolan would nose to the inside of Schiltz several times in the closing laps but wasn’t able to complete the pass. As the checkered waved, Schiltz crossed the finish line mere feet ahead of Dolan.

Dan Dickey of Packwood, Iowa, would come in third with Niffenegger nursing his sick motor to a fourth place finish Denny Banks of Washington would round out the top five.

Heat winners were Niffenegger, Schiltz, and Dan Ludwig of Keokuk. Don Hoffman was the consolation winner.

In Sportsman action, Jack Dunne of Keokuk came from his fifth-starting position to win a thrilling 15-lap contest. Dunne brought the crowd to their feet, passing Tony Stewart of Washington on the last lap to score the victory. 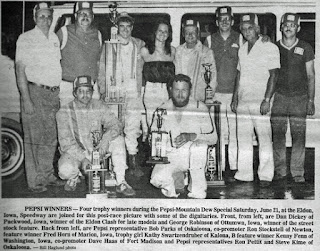 In early June of 1980, Rodney Combs of Lost Creek, W.Va., came to Iowa and proceeded to wallop a stellar field of Late Models in the prestigious Miller 100 stock car classic at Hawkeye Downs in Cedar Rapids. One of the drivers who on the receiving end of that trouncing was Fred Horn.

Horn, a builder of race cars himself, was so impressed with the lightweight fiberglass body and engineering of the Ed Howe-built Camaro, he purchased the car from Combs.

Two weeks later, June 21, Horn debuted the car at the sixth annual Pepsi-Mountain Dew Special and like Combs, got the same results. Horn made a quick $1,400, taking the lead from Ken Walton on lap 6 and then stretching his lead from there to claim an easy win.

So dominant was the Marion, Iowa, veteran, he lapped all but six of the 24 starters in the 30-lap contest. In addition to his share of the winner’s share, he received lap money and a six-foot high trophy.

Ken Walton, Johnny Johnson of Morning Sun, Iowa, defending champion Dick Schiltz, Ed Sanger and Dan Dickey were the only drivers to finish on the lead lap with Horn.

Winners of heat races were Ken Walton, Ken Hoeppner of Waterloo, Fred Horn and Johnny Johnson. Dan Dickey won the $300 winner take all Eldon Clash. This race was for the top eight cars in the point standings. Kenny Fenn was the B main victor.

In the Street Stock division, George Robinson of Ottumwa, Iowa, held off Dave Bronson of Ottumwa and Bill Metcalf of Eldon to score the win in the 15-lapper.

The sixth and final Pepsi-Mountain Dew Special at Eldon Raceway would bring one change as the event was now run by the National Speedway Contest Association (NSCA).

Ken Walton, now of Viola, Iowa, was the NSCA point leader but had no wins in the series. That changed on July 15, when he scored his first victory at Southern Iowa Speedway in Oskaloosa, which, ironically, was their Pepsi-Mountain Dew Special as well.

With some momentum from that victory, Walton came to Eldon on July 17 and won the 35-lapper here as well, taking home the $1,000 payday. Walton would earn every penny of his paycheck.

Curt Hansen would lead the first nine laps before Walton would take over the top spot. Hansen wasn’t giving in that easy and fought Walton tooth and nail for the lead until fading with less than 10 laps to go.

But the victory still wasn’t in the bag for Walton as a new threat, this time Don Hoffman, decided to give Walton a run for the money.

The Des Moines driver would give Walton all he could handle, actually grabbing the lead from Walton on lap 31, before sliding up too high in turn three, and giving Walton the lead right back.

Walton would cross the finish line several car lengths ahead of Hoffman to seal the victory with Hoffman in second. Bill Beckman of Lisbon would take third followed by early leader Curt Hansen and Tony Stewart of Washington.

Jim Brown of Ottumwa, Iowa, was an easy winner of the Sportsman division, leading all the way in the 15-lap event.