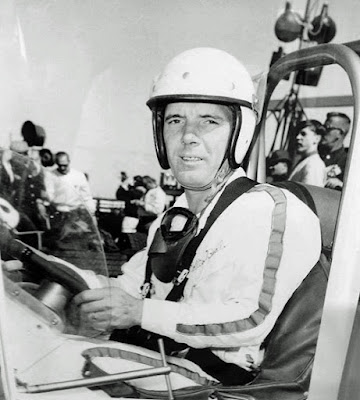 In winning the 25-lap feature, Beale bested 15 other cars and posted a winning time of 9 minutes and 54.48 seconds.

The big point battle for first place still continues with Jerry Richert, Forest Lake, Minn., and Jim Moughan, Springfield, Ill. In the driver’s seat. Richert is in first place with Moughan right behind him.

Gordon Woolley, Waco, Tex., who had been third in the IMCA point standings was mathematically eliminated as he drove in the consolation but not in the feature.

Beale, driving a Chevy, had little trouble in winning the feature. He grabbed the lead at the drop of the green and never looked back, winning by five car lengths at the finish.

The only major accident of the afternoon occurred at the beginning of the consolation when Gordon Woolley and Tom Bigelow, Whitewater, Wis., got tangled up.

Woolley hit the outer fence at the start and Bigelow got caught up in the melee, ending up under the steel fence. The race had to be halted for 15 minutes to remove the car and Bigelow was taken to an area hospital where he was listed in good condition with tire burns on his right shoulder.