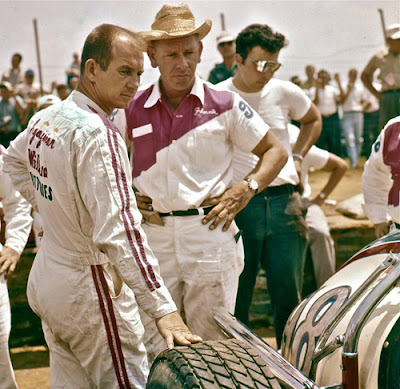 Parnelli Jones discusses pre-race strategy with chief mechanic Johnny Pouelson before the start of the 1962 Hoosier 100.

Jones’ winning speed of 90.604 miles an hour was more than 2 miles an hour slower than the year-old record of A. J. Foyt, partly because a spectacular wreck by Allen Crowe, Springfield, Ill., forced eight laps at slow speed.

Crowe was reported in satisfactory condition at a hospital, after his car lost a wheel, overturned and caught fire in front of the main grandstand. The blaze was extinguished quickly but the unconscious driver was pinned in the car for several minutes.

Jim Hurtubise, Parnelli’s old rival from North Tonawanda, N.Y., led the first five miles on the Indiana State Fairgrounds dirt track. But Jones shot back in front and Hurtubise spun and stalled trying to keep up with him.

Protests filed after the race left the order of finish in doubt. Veteran Don Branson, Champaign, Ill., was the apparent second-place finisher with Jim McElreath, Arlington, Tex., third. However, McElreath contended Branson picked up 10 seconds during a yellow-flag period.

Foyt, Houston, Tex., the defending USAC national champion, lost a slim mathematical chance to repeat when he was stopped Saturday by mud in his radiator. He would finish 16th.