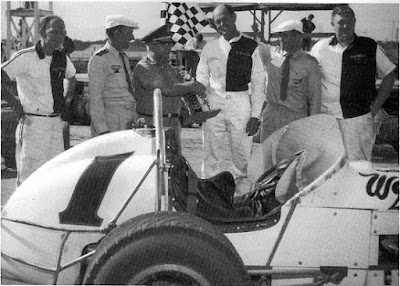 Lincoln, Neb. (September 5, 1963) – If you would have seen just one race of the Fairgrounds speedway-type program, you would have…well, enough racing to last you until Al Sweeney brings the Offys and Chevys to Lincoln next year.

That one race, however, would have to be the very last one – the Al Chamberlain Sweepstakes – Thursday’s 30-lap feature battle.

It had all the makings of writing a book, the way the drivers went all out to win the finale. Four of them were standouts;

· Gordon Woolley of Waco, Tex., won the big one, jumping into the lead right at the start as he had the front row on the outside. The Weinberger Chevy chauffeur is the International Motor Contest Association point leader.

· Pete Folse of Tampa, Fla., the pilot who dogged Woolley’s heels, but couldn’t quite make it to victory lane, and he had what he wanted - wanted a hard, dry slick track.

· Jim McCune of Toledo, Ohio, who spun against the wall on the second lap, got hi car back on the track, and all but drove the pistons out of his Chevy in an all-in-vain attempt to get back in the money.

… and to Buzz Barton of Tampa, Fla., the jovial speedster, the hard-nosed award. Barton, on the last lap, whizzed around thee third turn, lost his brakes, and smashed into the wall and tipped over. He came out with a cut on his nose.

Woolley, after cruising through victory lane, took a spin out to the scene of the crime to see what happened – an act of sportsmanship appreciated by the 4,200 fans.

It was a close race all the way with Barton, who won Monday, the challenger most of the way before Folse and Don Brown of San Bernardino, Calif., zipped by him on lap 25.

Brown, a newcomer to the IMCA circuit, finished third.

Woolley’s winning time of 16 minutes and 30.25 seconds was a record since the distance had never been run before.

But it wasn’t the only record as Jim McCune broke the 8-lap record. Runner-up in the Labor Day feature, McCune broke through the field before the pack even hit the first turn and was never threatened, clocking a record 4 minutes and 14.41 seconds.