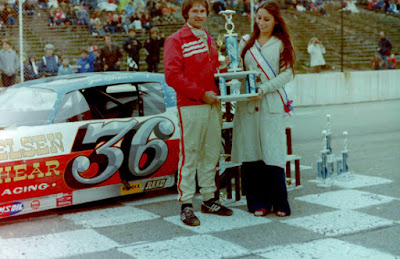 Joe Shear accepts his trophy after sweeping the Red, White and Blue Series.

The South Beloit, Ill., driver scored a six-car-length win the 65-lap contest over Larry Detjens of Wausau to wrap up his third feature win in a row this summer. Shear became the first driver ever to win all three races in the series since the event was started in 1972. He was also the first out-of-state driver to win the title.

Shear totaled 3,495 points during the series followed by Detjens with 1,835 points. Dave Watson of Milton was third with 1,455 and Alan Kulwicki of Greenfield was fourth with 1,235. Ted Musgrave of Grand Marsh rounded out the top five point getters with 1,195.

Gene Mathu of Luxemburg led the first three laps of the main event before the race was halted when the engine in Joe Laufer’s car exploded in the front stretch. The Hartford driver slid down half of the front stretch and solidly rapped the wall on the first turn. He was not injured.

Detjens slipped around Mathu on lap 6 while Shear and Kulwicki fought their way to the front of the field. Shear and Detjens raced wheel-to-wheel until the 12th round when Shear powered past on the front stretch. On lap 13, Detjens and Kulwicki tangled going into the first turn while dueling for second position. The two drivers were relegated to the back of the pack because of the accident with neither machine sustaining any major damage.

Shear then pulled away to a seven-car-length lead until the 23rd circuit until Tom Reffner of Rudolph blew an engine and spun out in the third turn. The resulting caution flag bunched up the field for the restart.

Moving quickly through the field after his earlier tangle, Kulwicki slipped outside of Watson on lap 26 to take over the second position. Also on lap 26, Wayne Weckwerth of Appleton blew an engine going into the first turn. Gene Coleman of Menominee, Mich., followed Weckwerth into the wall on the first turn and both cars were extensively damaged. Neither driver was injured.

When the race continued, it was a two-car battle between Shear and Kulwicki. On several occasions, Kulwicki pulled even with Shear but was unable to complete the pass.

Kulwicki dropped out on lap 56 enabling Shear to cruise home to victory with Detjens taking second. Watson took the last podium finish with Musgrave coming in fourth and Wayne Roffers of Oneida rounding out the top five.

A hard crowd of nearly 4,000 turned out in drizzly, cold weather to watch the conclusion of the series. A field of 48 late model stock cars competed.