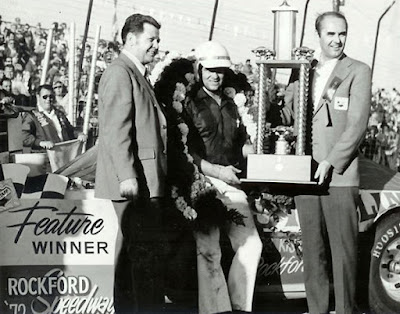 Rockford, Ill. (October 1, 1972) – Joe Shear of South Beloit, Ill., had been ruling the roost at Rockford Speedway all season long and he wasn’t about to let the invasion of drivers from several states change anything for the National Short Track Championships this weekend.

Shear started things off on Saturday by setting fast time in qualifying, winning a special qualifying contest and scoring a victory in the 25-lap Champion of Champions race that evening.

On Sunday afternoon, before a crowd of more than 5,000 race fans, he thoroughly dominated the 200-lap feature leading all but 21 circuits.

Shear has been a track champion at the high-banked quarter mile for the last six years, but had never won the Nationals up to this point. This was the seventh running of the event and the first year the Falstaff Brewing Company sponsored it.

(On a side note - Even though Falstaff was the event sponsor, patrons had to quench their thirst with something else on Sunday for the 200-lapper. Rockford was, by law, a “dry town” on Sundays and could not serve alcohol.)

The 200-lap main event started 33 cars with the 100 fastest qualifiers starting up front in inverted order. This arrangement gave Shear a 10th starting spot. Dick Trickle, who didn’t compete in Saturday’s preliminaries, was guaranteed a spot in the field by promotor Hugh Deery because of his record 66 feature wins – he would start 33rd.

Danny Bellard of Beloit, Wis., would take the lead at the drop of starter Jack Heiman’s green flag with Don James of Bloomington, Minn., and Larry Detjens of Wausau, Wis., in tow. Shear and Trickle would start making their way through the field.

When the yellow came out on lap 7, Shear was running seventh and Trickle already in 21st. When the green returned, Shear and Trickle continued to march through the field. Shear would move into fourth on lap 13 and third place on lap 19.

James would lose second to Shear on lap 21 and Bellard became runner-up on circuit 22. Shear would start to widen his margin and encounter lapped traffic.

James would slip past Bellard for second on lap 31as the latter tarted to fade. Jim Sauter of Necedah, Wis., moved his 1972 Camaro into third on lap 40.

A red flag on lap 44 allowed cars to pit for fuel and Trickle, who was 11th at the time, came back out and tagged onto the rear of the pack instead of back into his position as he could under a late rule change decided by drivers prior to the race starting.

The first lap on the restart would see Shear, James, Sauter and Dave Watson of Beloit, Wis., in the first four places. Shear pulled away fom the pack was soon on Trickle’s rear bumper. But it would take him 35 circuits before he was able to put a lap on the purple and white #99 Mustang.

Shear lapped third place runner Don James on lap 112 and Watson would follow Shear past James, who obeyed the “move over” flag. Trickle caught James for fourth one lap later.

Shear would pit for fuel during a caution on lap 122 and just make it to the front of the pack when Heiman dropped the green again. Sauter would get by Watson for third. Positions among the leaders would not change for the remainder of the race.

Trickle would drop out three laps later with a broken axle.

Jim Sauter was about a half-lap behind Shear despite the fact the “move over” flag wasn’t used for his benefit as it was for Shear and Watson. He would spin on lap 161, go completely around and recover without losing his position.

Shear would cross the finish line with Sauter, Watson, James and Greg Arenson of Minneapolis rounding out the top five.

Before the 200, a 50-lap race was held for those who did not make the starting 33-car field. Steve Arndt of Janesville, Wis., survived a trunk-shortening crash with leader Jerry Peterson of Marseilles, Ill., to take the win.