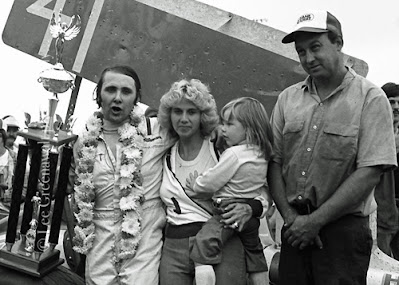 Mechanicsburg, Penn. (September 24, 1978) – Kramer Williamson took the lead with 40 laps remaining in the 100-lap National Open on Sunday, breaking open what had been the most competitive race in the 16-year history of the season-ending classic.

During the first 50-lap segment of the long-distance grind, Williamson chased Smokey Snellbaker, who started on the pole as a result of his 21.58 second clocking in Saturday’s time trials and led every lap.

Williamson moved into the runner-up spot on lap 25 and held it until lap 45 when Van May, the defending National Open champion, passed him for a brief moment.

It was at this stage that Snellbaker, May, and Williamson all got together, with May getting the worst of is and dropping back to sixth.

After the incident, Williamson followed Snellbaker under the checkered as the race was halted for a mandatory fuel stop.

When the race restarted, Snellbaker retained the upper hand until a caution on lap 60. On lap 61, Williamson moved low in the first turn and came off the second turn with the lead.

Once in front, the veteran chauffeur was the class of the field. He never got a serious challenge even though the yellow flag was displayed on two occasions.

For his victory, Williamson collected $4,180 in purse and contingency money. He was quick to credit mechanic Davey Brown with numerous changes during the mid-race break. They included new rear tires, an adjustment with the wing and a slight change of weight.

Snellbaker hung on for second, a quarter of a lap behind. For his day’s work, he collected $3,030. As for May, he was never a factor after being forced to pit stop on the 58th lap.

Tom Spriggle came home third even though he was running a small 312 engine. Allen Klinger was fourth and Rod Gross fifth after a last-lap mix-up which saw Keith Kauffman drop from third to 11th.
Results –