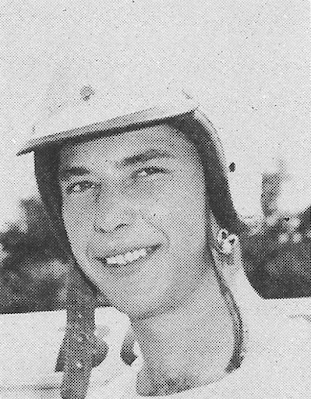 Muskogee, Okla. (September 22, 1957) – Persistence and a flash of daredevil driving paid off for young Bob Burdick, the Omaha Comet, Sunday as he rode home first in the 100-lap late model stock car race at the Oklahoma Free State Fair.

The time of the big event, curt from 150 laps because of track conditions, was 51 minutes and 12.85 seconds.

Burdick, who is waging a nip and tuck duel with Johnny Beauchamp of Harlan, Iowa, the current point’s leader in the International Motor Contest Association, dog-tailed Lenny Funk of Otis, Kan., for the first 80 circuits before making his bid for the victory.

The winner, driving a borrowed car, sped through an opening on the south turn on the 82nd lap to take the lead from Funk, then stayed in front for the remainder of the way.

Track officials said that before the race Burdick’s regular car had been damaged and sent back to Nebraska for repairs, but the Omaha Comet had borrowed a 1957 Ford from a friend in order to compete in the race after it had been announced that he would be entered here.

Funk finished second for the second straight year and Darrel Dake was third. Funk, driving a 1957 Chevrolet, comes from Otis, Kan. Dake hails from Cedar Rapids, Iowa, and wheeled a 1957 Chevrolet around the half-mile dirt track, which was lightning fast in the straightaways but soggy, muddy and plenty rough in the south turn.

Track officials spent Sunday morning working on the racing surface to make it suitable for racing before an overflow crowd of 8,000. As it was, the program didn’t start until 3:45 pm following the time trials.

Dake turning in the best time in the fight for starting positions with a clocking of 31.62 seconds. Funk was second fastest with a time of 31.65 seconds followed by Burdick at 31.70 seconds.

Beauchamp, the defending IMCA national champion, finished fifth in the race behind Dick Pellow of Minneapolis, Minn. He rode in fourth position for most of the race but lost a spot when he had to stop for water late in the race.

Burdick and Funk went the entire distance without having to make a pit stop, and Dake went 97 laps, losing three laps when he spun out midway in the race and crashed into the fence on the front straightaway.

Funk took the lead at the very start with Dake running second, Burdick third and Beauchamp fourth, a lineup that held until lap 50 when Dake lost ground and time in his accident.

After that, Funk set a sizzling pace with power and skillful driving, and Burdick waged a one-two battle with Funk until the 82nd lap when Burdick went out to stay in front.