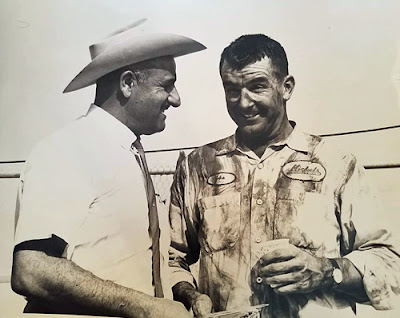 The huge crowd, which bought every ticket in sight and then grabbed standing room space, was deprived of seeing a spectacular battle between A. J. Foyt and Rodger Ward when both drivers had poor racing luck.

Foyt, driving a 1964 Dodger, and Ward, in a 1964 Mercury, both passed pole-man Leonard on the sixth lap and then took turns at the lead through 20 laps before their bad luck began.

The first mishap of the injury free race cam e on the 27th lap when Bay Darnell of Deerfield, Ill., turned over his 1964 Ford going into the south turn and the car caught fire as Darnell walked away from the wreck.

Foyt, having early tire trouble, made a pit stop while the cars ran under the caution flag. Parnelli Jones, the sixth fastest qualifier, also took his Mercury for a pit stop at this stage.

Ward held the lead at 30 laps, Len Sutton and his 1964 Dodge at 40 laps and Leonard at 50 laps as the three leaders stayed far in front of the field.

On the 58th lap Eddie Meyers of Glenview, Ill., turned over his 1964 Ford going into the north turn. Ward, Lloyd Ruby and Gary Bettenhausen, son of the driving great, Tony Bettenhausen, smashed into the wreckage and both Ward and Bettenhausen had to quit the race.

Leonard and Sutton continued to run one-two through the last 40 laps of the race. Don White, in a 1964 Ford, had threatened from third position until he went out on the 60th lap.

Foyt, who was not among the top 10 cars at the mid-way point after a second pit stop, provided most of the thrills in the last half of the race.

The 29-year-old Houston pilot, regarded as the fiercest competitor in racing, passed car after car in the battle for also run positions and finished fifth behind Leonard, Sutton, Bobby Marshman in a 1964 Ford and Norm Nelson in a 1964 Plymouth.

None of these drivers had to make a pit stop.

This compares with a race record time of 1hour, 10 minutes and 18.52 seconds set by Paul Goldsmith in 1961 in a Pontiac.

The race produced a Du Quoin record purse of $23,650 exclusive of accessory payments. This record stood for only 24 hours as the Labor Day big car race produced a $24,050 purse.