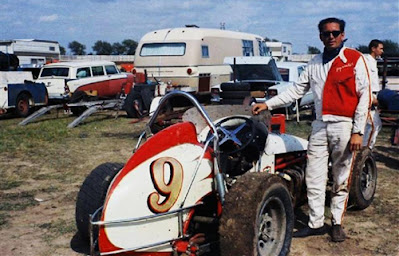 Hutchinson, Kan. (September 16, 1967) - Jay Woodside, who developed his driving skills on the dusty tracks of Kansas, outraced Jon Backlund on the last lap and won the feature event on the International Motor Contest Association sprint car program, which opened racing activity at the 1967 Kansas State Fair on Saturday.

He had trailed Backlund, the rookie sensation of the IMCA dirt track circuit this year, for 19 of the 20 laps, but slipped to the inside less than a half mile from home, gunned into the final turn and won the race with a floor-boarded accelerator down the home stretch.

Finishing third was Karl Busson, Toledo, Ohio, the current leader in IMCA point standing. Fourth was Jerry Richert, Forest Lake, Minn., a three-time IMCA sprint champ who had set a new all-time record for the state fair track with a clocking of 24.40 seconds in time trials.

Neither Busson nor Richert, who were expected to duel for the first place cash whenever they met, had a good day. Busson finished third in the 7-lap opening event as well as in the feature. Richert finished fifth in the opening dash and fourth in the main event.

Lee Kunzman, a rookie from Guttenberg, Iowa, won the first 10-lap heat race, while Walt McWhorter, Wichita, won the second, in his Dodge powered car. McWhorter took the lead on the opening lap and steadily pulled away to finish Chuck Kidwell, Lincoln, Neb. J. L. Cooper of Kansas City was third while two well-known jalopy pilots, Grady Wade and Roy Bryant, both of Wichita, took the fourth and fifth positions.

Roger Lane, of Blue Springs, Mo., won the 12-lap semi-main event despite the best efforts of Roy Bryant to catch him. Bryant went high on the track, and he went low but could never move to the front.

The cars for the main event varied in size of engine from 309 to 427 cubic inches. However, several of the drivers complained that the extra horsepower was useless since the track dried out too much to allow them to use it. The track was watered several times, but the sun and skimming wheels immediately dried it out.