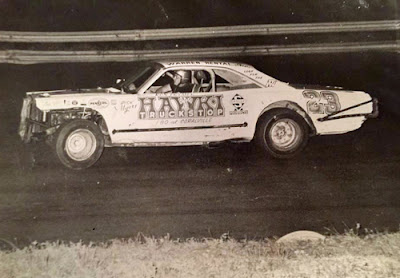 Prymek took over the lead after the 16th lap, when Ron Hemsted of Lone Tree incurred a flat right rear tire and had to start in the back of the pack after he had led the race for 12 laps. The event was marred by several spinouts which stopped the race.

Perry Beckler of Tiffin held third place for 12 laps then moved into second spot when Prymek went ahead. Beckler chewed at Prymek's door for several laps and was barely beaten out only as the checkered flag fell.

No time trials were held for the championship race, so the drivers drew for positions in the heats. Don Morgan of Muscatine finally picked up the trophy for the final trophy dash of the year at the Louisa County Fairgrounds track.

Bob Helm of Andalusia, Ill., and Hemsted fought neck-and-neck for the 10-lap first heat event, with Helm coming in first for the flag. Beckler drove to victory in the second heat event. Morgan picked up the third heat event and, in a two-car, three-lap semi-main event, Tom Spitznogle of Fruitland won hands down when Bob Kleindolph of Muscatine spun out on the white flag lap.