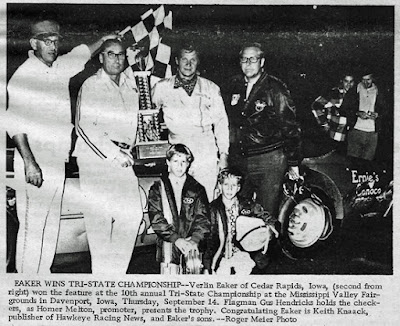 The event had 43 cars signed in with Fred Horn of Marion, Iowa, the fastest in time trials, with a clocking of 26.39 second on the half-mile dirt oval. This put Horn and Eaker on the front row for the 35-lap championship feature.

Eaker would take the lead at the drop of the green and never look back, winning handily at the finish. Horn would grab second while John Connolly of Delhi, Iowa, finished third.

Fourth and fifth place was a photo finish as Bill McDonough of Cedar Rapids, Iowa, just beat Roger Dolan of Lisbon, Iowa, at the wire.