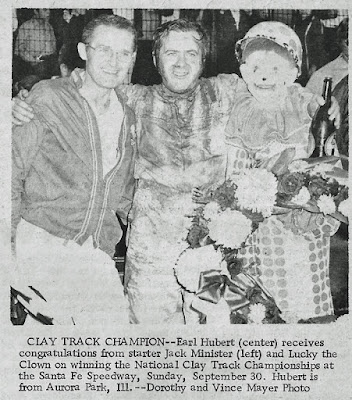 Thirty-two cars made the field with 17 sticking around for the checkered flag. Fifty-six cars qualified with 24 competing in the 20-lap semi-main won by Jeff Koehler of Blue Island, Ill.

The race was red-flagged once and slowed down five times by caution flags. After lap 55, however, the 100-miler was run non-stop. Harold Mueller of Eau Claire, Wis., made one-half lap when a tire came bouncing off into the infield bringing out the re flag, knocking out Mueller and opening the way for an alternate starter in Koehler.

Crowd favorite Dick Nelson immediately took charge on the restart. The seven-time speedway champion was making his final start in a brilliant career dating back to 1957. It was obvious that Nelson, the fast qualifier at 20.51 seconds on the half-mile, wanted to leave Midwest clay oval fans winning memories before moving to Florida.

Nelson survived five yellow flags and repeated stabs by Jackson to lead for the entire first half of the 200-lapper.

Hubert, meanwhile, had moved from his third-row starting position to pass Jackson and challenge Nelson on lap 100. On lap 103, Hubert broad slid Nelson with such awesome power that it appeared Nelson had been standing still.

It seemed evident a few laps later that only mechanical difficulties, a costly miscalculation, or a sudden surge by another driver could stop Hubert’s bid for the title. It was not to be…

Jackson did cut into Hubert’s advantage around lap 150 as Hubert was having trouble getting by USAC stock car star Bay Darnell of Deerfield, Ill., and Michigan driver Don Bray. Jackson pulled within tow car lengths at that point as a packed house encouraged the Santa Fe regular.

The difference proved to be the Buick’s power in the straightaways, a difference, ironically, Jackson had in previous years used to his advantage at Santa Fe half-mile shows.

This time, he was a victim of that power shortage.