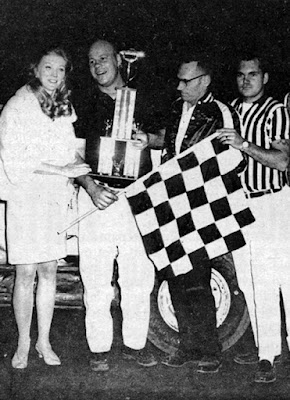 East Moline, Ill. (September 3, 1967) - They had a parade last night at Quad-City Raceway, and Dean Montgomery was grand marshal.

The balding Milan driver, veteran of numerous stock car campaigns, climaxed a brilliant second half season at the East Moline track when he led from start to finish in a smooth 50-lap run for season championship in IMCA late model competition.

The leader in the point standings for the season, Montgomery drew the pole position and elected to start on the outside of the front row in the main event. Jim Gerber of Mt. Joy, second in the season point standings, was alongside him and actually sat on the pole.

When the starter’s flag dropped, Montgomery accelerated his 1967 Chevelle, sponsored by Bob Eriksen Chevrolet of Milan, in front of Gerber’s howling Dodge Charger and grabbed a car length lead heading into the first turn.

That started the parade and it continued without interruption. Montgomery widened out to a half-lap lead midway through the feature, then yielded a bit of ground as Ben Hofer, defending Raceway champion, closed past Gerber and Don Bitner of Peoria and finished second. Hofer trailed by nearly one -half lap at the finish.

After the first few laps the only question about Montgomery was whether some of the cars he was lapping might spin in front of him and damage his car, but he negotiated all traffic smoothly.

There was nary a wreck to cause a restart — and to bring the pack up on Montgomery’s bumper - in the late model feature. Sixteen cars started the race and 14 were still running at the finish.

Hank Strube of Peoria, Jack Henson of Biggsville and Ray Guss of Milan were heat winners.