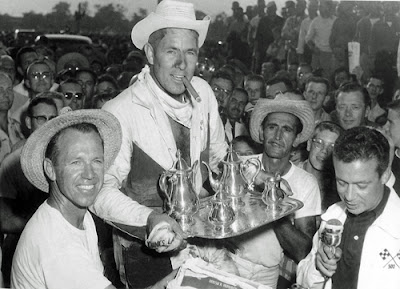 Sweikert, who switched to the Lute’s Auto Parts Special for this race, bested Sam Hanks of Burbank, Calif., in the Belanger Special for second place by about a car length after a thrilling duel in the late stages of the race.

Don Freeland of Redondo Beach, Calif, escaped serious injury in a spectacular crash. Freeland’s Bob Estes Special was damaged badly when it struck the outside guardrail in the first turn and then flipped over. The 29-year-old driver ducked into “the basement” and suffered only a sore right shoulder.

Bryan finished nursing a badly worn right tire but had built up enough of a lead over Sweikert and Hanks that he didn’t have much to worry about except the size of the prize.

He also dragged down 200 more championship points – almost double of that off Jack McGrath of Inglewood, Calif., who moved into second place by capturing fourth-place in the race in the Hinkle Special.

Bryan, the 26-year-old “Arizona Cowboy,” started in the fifth spot. Manuel Ayulo of Burbank, Calif., won the pole position for the second year in a row, this time with a fast lap of 39.93 seconds.

Sweikert took the lead from Ayulo on the first lap. He had built up a six-second lead by the end of five laps but Bryan who had moved past Ayulo into second by the ninth lap, started trimming it. The margin was down to four seconds on lap 15 and two car-lengths by lap 20.

The crowd was on its feet as the lead changed hands between Sweikert and Bryan twice on lap 24 and three times on lap 25 but Sweikert managed to beat off the challenges and still have first place at the finish line on both laps.

Bryan dropped back slightly and played a waiting game for a while but moved under Sweikert in the west turn on lap 40 to take first place. Sweikert challenged Bryan on lap 41 but Bryan would come out on top for good.

He boosted his lead to six seconds at the 50-mile mark and was still pulling away at the three-quarter mark when Johnnie Parsons of Van Nuys, Calif., spun and brushed the outside guardrail on the east turn.

On the restart, Bryan pulled away again and despite the tire issues late in the contest, won handily.