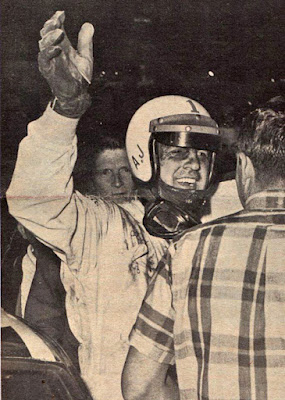 A.J. Foyt waves to the crowd after winning the USAC stock car main event at Tri-County.

West Chester, Ohio (September 13, 1968) - A.J. Foyt in his 1968 Torino showed no indication that Friday the 13th troubled him in any way as he aced the field to take the United States Auto Club late model stock car 100-lap feature at Tri-County Speedway.

Dave Koehler and Lennie Waldo led the first few laps but 14th place starter Roger McCluskey caught Waldo on the inside of the fourth turn and maintained the lead for the next 12 laps, followed closely by Foyt. Foyt took over the lead on the front chute of the 18th lap but McCluskey returned to the first spot on lap 19 through the 21st.

Foyt took over the permanent lead on the 22nd lap and set a hard pace to win handily.

McCluskey and White became the race to watch as they maintained a car length's distance throughout the race. La Marr Marshall came in fourth followed by Dave Whitcomb, Dave Hirschfield, Frank Freda, Bob Harkey, Lennie Waldo, and Paul Feldner rounding out the top 10.

Al Unser from Albuquerque, New Mexico, driving a 1967 Plymouth, set a new track record in qualifications clocking in at 22.14 seconds.

Unser showed that his qualifying time was no accident as he shot to the lead to cop the 4-lap fast car dash. He was followed to the flag by Don White, Butch Hartman and Dave Hirschfield.

Foyt caught early leader Glen Bradley in the fourth turn on the second lap to snare the first heat. Last place starter Unser worked his way through the pack to take second, followed closely by McCluskey.