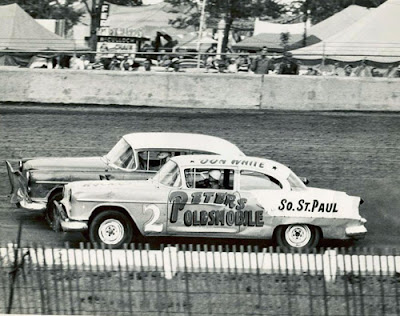 At least he dictated the terms again on Thursday afternoon in the 100-mile, 200-lap stock car race in flashing to his third victory in three days of competition by picking up $800 after lapping all 27 entrants.

Driving a 1954 Oldsmobile, White took the lead on the sixth lap and held it all the way, finishing three-quarters of a lap ahead of Ernie Derr of Fort Madison, Iowa, also driving a 1954 Olds and the International Motor Contest Association’s point leader.

Only 17 of the original field finished before 29,782 fans, the largest crowd ever to witness a stock car race in Minnesota State Fair history.

While blowouts were numerous, only one mishap marred the race when Chuck Magnison and Shorty Perlick, both of Minneapolis, and Mike Gleeman of St. Paul, became involved in a three-car crash. Perlick was able to continue.

Magnison’s and Gleeman’s cars both rolled over, but neither driver was injured.

For the 100 miles, White’s time, despite slowdowns on yellow flag laps, was 1 hour, 51 minutes and 37 seconds.