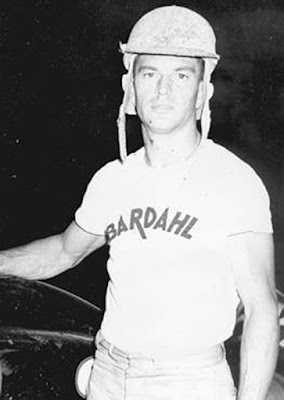 Spencer, Iowa (September 10, 1957) - Bobby Grim walked off with the feature event of the International Motor Contest Association big car races at the Clay County Fair on Tuesday afternoon, but not before he had eaten the dust of a couple of competitors.

Grim took the lead from Johnny Pouelson of Gardenia, Calif., on lap 11 of the 20-lap contest.

Pouelson, who started in the second position next to Grim, too the early lead and maintained about a car-length advantage between himself and the Indianapolis speedster.

But he made his first and only mistake on lap 11 by taking the first turn too wide and Grim was quick to take advantage of Pouelson’s blunder. He ran away from Pouelson and the rest of the field and won comfortably.

The time of the contest was 9 minutes and 59.1 seconds.

Farmer and Gottschalk had previously made Grim eat a little dust as they won the Barney Oldfield Dash and the Bob Slater Dash, respectively, with Grim taking second place in both.

Finishing behind Farmer and Grim in the Oldfield 5-lap dash was Vern Chamberlain of Minneapolis and Pouelson.

Behind Gottschalk and Grim in the 7-lap Slater Dash was Red Hoyle of Phoenix, Ariz.

Pouelson was the winner in the Gus Schrader 7-lap dash while Jimmy Jones of Norwalk, Iowa, grabbed runner-up honors.

All told, there were four crack-ups in the big car program. Luckily, none of the drivers were seriously injured.

Des Moines driver Bob Coons had perhaps the worst accident of the of the afternoon as he crashed through the infield fence during the feature. Coons’ car was badly damaged in the front end, but he was expected back for Saturday’s race program.

Bob Cleburg of Rio, Wis., one of the big winners last week at the Iowa State Fair, went out in the time trials, smashing into the outside wall, severely damaging the front end to his car. He is also expected back for the big finale on Saturday.