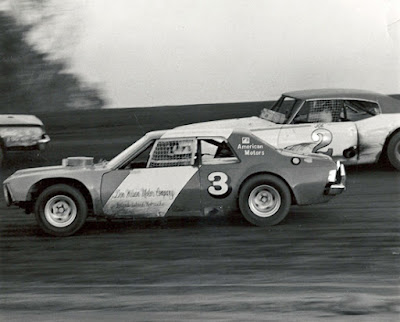 Bosselman, driving an American Motors car with a small (305 cubic inch) block, had to rally twice before capturing the victory in an exciting main event.

But Wrich and Bosselman gradually closed in on Blankenship and coming out of turn four on lap 18, Wrich made a move to pass Blankenship.

However, Wrich slid a little too high and Bosselman dove underneath and took the lead.

“He (Wrich) went too high and I went under,” said Bosselman. There was a ring of tires marks around the track and as long as you stayed within that you were okay. But if you got out of that, it cost you.”

Wrich got another chance, later, however, when Bosselman made the same error. Coming out of the same corner on lap 31, the Grand Island driver looped his car.

“I just went in too hard,” Bosselman remarked afterwards. “I felt the rear end go out and I just decide to let it go all the way around.”

With Wrich now finally in the lead, the Kennard driver looked like a sure winner when disaster struck on lap 40.

Wrich’s starter wire fell off, shutting him down and putting Bosselman back in the lead, this time for good.

Bosselman said that he actually thought a smaller engine helped him, especially driving through the corners. “You had to almost stop when going around the corners and when you do that, it’s a little harder for those bigger cars to get going again.”

After the race, a controversy emerged over Bosselman’s tires, which may not have been regulation.

However, National Speedways’ vice-president Woody Brinkman ruled that Bosselman’s win would stand up. “No one complained about his tires during the rules meeting before the race, so it was too late to protest after the race,” Brinkman said.