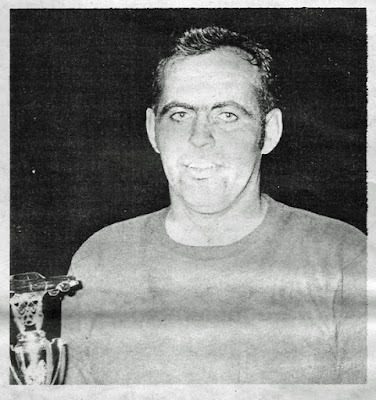 Des Moines, Iowa (September 11, 1971) – Stan Stover of Reinbeck found his groove midway through the 35-lap feature, gaining a permanent lead from Bob Hilmer of Dysart on the 27th lap, and capturing both the point championship and the season championship victory in late model stock car racing before 9,005 fans at the State Fairgrounds on Saturday.

Joe Merryfield of Des Moines led all the way against a field that was short of many of the top drivers and captured the season championship victory in the 20-lap sportsman feature.

“I finally found where I should be going,” the happy Stover said as kept a wary on a pit crew member as he attempted to load his 1970 Nova on the trailer.

After a couple of interruptions when Stan yelled instructions and gave a helping hand, he said the point title was the first he has ever won. “However, I won the season championship feature here last year,” he added.

Stover and Hilmer, driving a 1971 Chevelle, put on one of the battles of the season.

Both started in the front row and Bob, the 1969 late model king at the fairgrounds, took the initial lead. Stan took over in turn one, but Hilmer had the lead coming out of two and Stover slipped to third as Dan Dickey moved up behind Hilmer.

Stover fell behind briefly then he discovered he could move on the inside. It took him nearly five laps, but he passed Dickey's 1970 Dodge on the 14th lap and moved up behind Hilmer.

Stover and Hilmer waged a see-saw battle before Stover passed him for the final time on the backstretch of the 27th lap.

Meanwhile, Darrell Dake of Cedar Rapids had passed Dickey in the final laps. They finished third and fourth respectively.

Dick Oldham of Des Moines, who lost his 1969 Chevelle with gear problems in an afternoon race at Spencer, Iowa, attempted to race Merryfield’s Chevelle but went out early in the late model main.