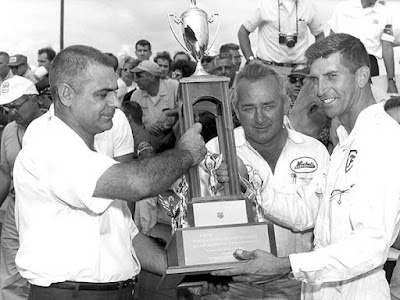 Fast qualifier Rodger Ward, after one false start, sent the 27-car field into the first turn and held the lead for one-third of a lap. Goldsmith adroitly overhauled Ward on the backstretch but relinquished the lead to a charging Bill Cheesbourg. In turn three it was Ward again before Goldsmith charged into first place on the main chute. He was never challenged again.

Back in the field, teammates Eddie Sachs and Dick Rathmann tangled Zecol-Lubaid Fords, sending the former to the pits. Rathmann pitted briefly, resumed the chase, and finished a clean third behind the other Zecol-Lubaid, driven by a consistent Don White.

The showers came early for Ward as he completed only a tenth of the century before a leaky radiator forced his Pontiac out. For the national champ, A.J. Foyt, an ominous noise at the halfway point of the race indicated trouble for the hard-lucked Texan. Foyt had moved from fourth to second, trailing Goldsmith by only 10 seconds when his engine collapsed.

Foyt’s retirement moved Bill Cheesbourg into second, but that was short-lived. Just as Cheesbourg started to fade, Whitey Gerkin was crowded into the inner guard rail in the first turn, spun backward into the outer wall, and then righted himself and continued. Cheesbourg’s car would drop a driveshaft three laps later, eliminating the husky driver from Tucson, Ariz.

The final 40 circuits went green without any further mishaps. Ed Meyer would spin in the south turn but continue. Goldsmith stretched his lead to 18 seconds over White as Rathmann moved quickly into third ahead of smooth driving Herb Shannon.

Unofficially, it was the third largest crowd to ever witness any kind of auto race. More than 35,000 fair goers were in attendance and grandstands were filled. In two years, the stock car purse has jumped from $11,000 to $20,00 plus. Time for the race was 1 hour, 12 minutes and 54 seconds.