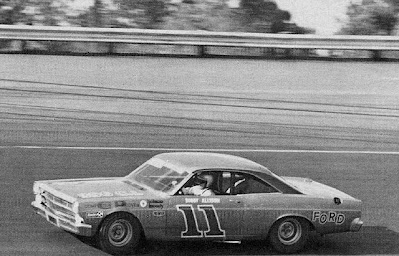 Rockingham, N.C. (October 29, 1967) - Bobby Allison finally climbed into a bucket seat that would carry him to victory, and Ford Motor Company found a new combination.

Allison, a little guy from Hueytown, Ala., who had had two factory-backed rides previously this season, drove a factory Ford, sponsored by Fred Lorenzen, to victory in Sunday's American 500 here at North Carolina Motor Speedway.

The win evened things up between Ford and Chrysler on the South's superspeedways for this season. This was the last big race. The two companies won five races each.

Ford won both races at Daytona, both at Atlanta and yesterday at Rockingham. Chrysler captured two wins at Darlington, two at Charlotte and one last spring at Rockingham.

Allison came to the front and took the lead for good on lap 389 in this 500-miler over a banked one-mile track, He grabbed the lead when Cale Yarborough span and wrecked when the engine blew in his 1967 Ford.

Allison was in the lead six different times and Yarbrough seven times.

The race, which required more than five hours to complete, was marred by several multi-car crashes. All total, the caution lights were flicked on nine times for 69 laps.

The race was hotly contested until Allison took over, and then he coasted to victory. Pearson finished second in another Ford, but was a lap behind, then came Paul Goldsmith in a Plymouth, Foyt in a Ford, and Johncock in Mercury to round out the top five.

Only 12 of the 44 cars were running at the finish.

The first wreck occurred in the first turn on the 20th lap and took out Jack Bowsher, Bob Wawak and Earl Brooks. Bowsher was running second at the time and the leaders were passing slower cars when apparently Frank Warren cut down in front of Brooks and the cars started piling up. Lee Roy Yarbrough was involved, but continued in the race. Most all the front runners dodged and ducked their way through the spinning cars which nearly blocked the track.

The second caution took out five cars and happened on the backstretch as the cars came off the second turn. Apparently the timing chain broke on Bobby Isaac's car and he lost his power. When he did James Hylton rammed into the rear of Isaac's machine, then Jim Paschal hit the rear of Hylton's car and Hylton spun straight into the wall. He bounced off the grandstand wall and when he did G. C. Spencer plowed into Hylton's left quarter panel. Then came Wayne Smith and crashed into the pileup. Hylton and Smith were carried to a Richmond County hospital where they were held overnight. A hospital spokesman said the two were held for observation, but that neither was seriously hurt.

The other wrecks were less serious, however, on the fourth caution an accident occurred in the pits which could have been serious. This one took out Petty.

The fourth caution waved when Frank Warren spilled oil on the track from a blown engine. The front runners were pitting. Petty was following Pearson down pit road when Pearson ducked into his stall. Petty rammed into the back of Pearson's car, and then bumped against Donnie Allison's Ford. Allison's crew was already changing tires when Petty bumped the car, and one crew member nearly got pinned between the two. 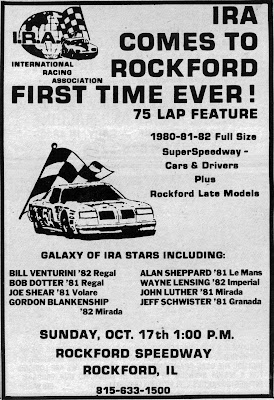 The Autumn Spectacular at the Iowa State Fairgrounds

by Lee Ackerman
Omaha, Neb. - In 1979 Lefty Robinson convinced the Iowa State Fairboard to let him run a fall race to be called the “Iowa Autumn Spectacular.” The event turned out to be a great idea. More than 7,000 fans showed up on October 6, 1979 for the event which featured Late Models running for a purse of $15,000.


The event was actually planned to be a double feature show with both features being for 25 laps, with the second feature an inverted start from the finish of the first event. But plans were changed because of the old nemesis at the Fairgrounds, the 10:30 pm curfew. So instead of having two features it was decided to run just one feature of 35 laps. 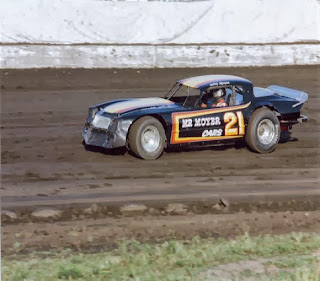 Billy Moyer Jr. - Joyce Moyer Photo
Qualifying would see young Billy Moyer, Jr. of set the pace with a clocking of 24.996 seconds. Karl Sanger of Waterloo, Don Hoffman of Des Moines, Johnny Johnson of Morning Sun and Joe Merryfield of Des Moines would round out the top five in qualifying.


Don Hoffman would take the trophy dash followed by Merryfield and Moyer. Craig Spetman of took the opening heat followed by Jerry Holtkamp of Williams and Bill Martin of . The second heat would see the only serious incident of the night when Randy Sterner of and another car tangled exiting turn 4. The incident sent Sterner’s ‘79 Trans Am head on into the cement wall.


Sterner was taken to a hospital where it was determined he had suffered a broken back. Hoffman would end up winning the heat with Rocky Hodges of Des Moines and Denny Osborn of Cedar Falls running second and third.


Red Dralle of Evansdale won the third heat beating Tim McDonough of and Karl Sanger. The fourth heat went to Bill Rice of followed by Dick Schiltz of and Mike Frieden of . ’s Jim Burbridge won the consolation event with Dave Birkhofer of second and Steve Keppler of third. 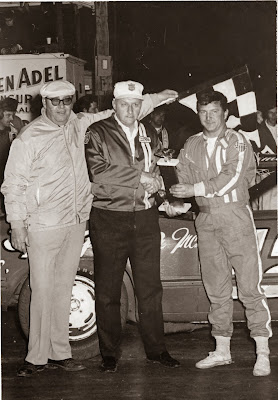 Don Hoffman
Starting well back in the field, Don Hoffman would steadily work his way to the front, eventually taking the lead and driving his way to a big pay day. Hoffman would earn $600 for winning the trophy dash and $75 for each position he advanced in the feature, finishing with $3,300 for his evening’s efforts. Hoffman would be followed by Denny Osborn, Tom Hearst of , Curt Hansen of Dike and Bill Rice.


It would be the first time some of the Late Model drivers had driven at the Fairgrounds in 1979 as the regular weekly shows featured Limited Late Models due to a boycott of the track by several drivers in 1978 over weight restrictions. The success of the “Autumn Spectacular” would assure that the race would be held again in 1980.


The Late Models would return to the Iowa State Fairgrounds for the second annual “Autumn Spectacular” on September 19 & 20, 1980. That two day show would see Billy Moyer, Jr. set a new track record for Late Models with Mufflers at 23.52 seconds. ’s Kevin Gundaker (winner of the NSCA sanctioned Hawkeye 100 at the Fairgrounds a month earlier) would be the second fastest qualifier at 23.74 seconds.


The pair would continue to be the fastest cars at the track later in the evening when they both won their heat races. Gundaker would take the first heat passing defending race winner Don Hoffman on the final lap. Darrell Sells of Waverly was third and Joe Kosiski of fourth. Moyer would hold off Dave Chase of , Joe Merryfield and ’ Larry Wasserfort to win his heat.


On Saturday night Late Model action kick off with a trophy dash that saw Gundaker to be the fastest car taking that win over Joe Kosiski, Moyer and Darrell Dake of Cedar Rapids.


The 40-lap feature would end up being a continuation of the trophy dash as Gundaker would take home the top prize and once again defeat defending race winner Don Hoffman for the honor. 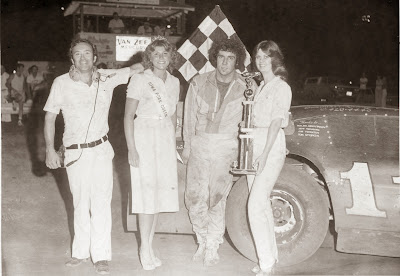 
Gundaker’s share of the purse would be $3,060. Following Gundaker and Hoffman to the line were Kosiski, Moyer and Chase.
The race would be held for only two years but it would provide race fans with some great racing action.
No comments: 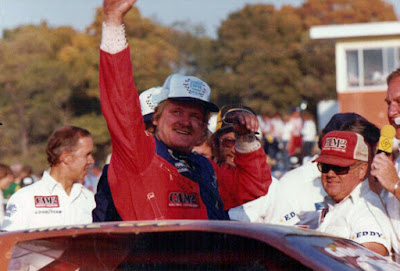 The four-time American Speed Association driving champion, easily the fastest man on the track, took the checkered from flagman Johnny Potts with a 3.8-second edge over Butch Miller of Lawton, Mich., before the largest crowd in the 14-year history of the event.

In a race slowed by 12 caution flags, for a total of 85 laps run under yellow, Eddy, who previously won this classic in 1981, was clocked in two hours, 39 minutes, 30.14 second for his victory ride. Eddy and Miller were the only cars in the same lap at the finish as Jim Sauter of Necedah, Wis., who took third, was two laps off the pace.

Fourth, seven laps behind the two frontrunners, was 1980 race winner Terry Senneker of Wayland, Mich. fifth, 16 laps back at the end, was Tom Jones of Northbrook, Ill.