1976 – Iowa Drivers Clean up at Marshfield 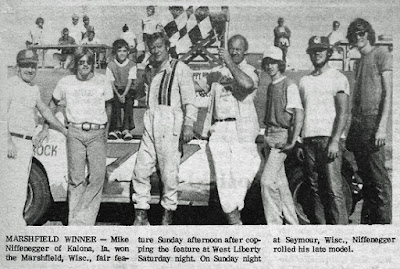 Niffenegger, behind the wheel of Vince Fiala’s Camaro, traded the lead several times with Leon Plank of Mondovi before finally securing the top spot on lap 27 as the pair began lapping slower traffic.

In the next 20 circuits, Niffenegger built a three-second cushion over Plank’s Camaro, but the advantage was erased by a red flag on lap 47 when Ron Ashbeck stalled on the backstretch.

The caution period allowed Niffenegger’s major challengers, Plank and Ed Sanger of Waterloo, Iowa, another opportunity to wrest the top position from the 17-year veteran.

However, Niffenegger was up to the challenge and while Sanger nipped at Plank’s rear bumper, the 36-year-old leadfoot opened up a six-second margin at starter Keith Knaack’s checker.

Plank edged Sanger’s Camaro by a car-length at the finish. Bill Beckman of Lisbon, Iowa, led Eau Claire’s Red Steffen, Gary Webb of Davenport, Iowa, Bob Saterdalen of Oronoco, Minn., and Tom Greenlee of Loves Park, Ill. To round out the top eight.

The victory was worth $1,000 to Niffenegger, the 1976 track champion at West Liberty.