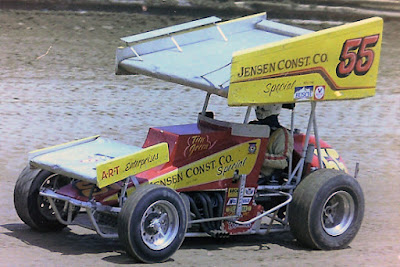 Green escaped damage to his car, owned by Jensen Construction of Des Moines, when he collided with Gary Dunkle of Waverly, Neb., on lap 21. Dunkle was running second at the time and Green, who was trying to pass, was third.

Green also had the benefit of Steve Kinser running out of fuel on the 24th circuit, while leading by a comfortable margin.

Kinser, the present World of Outlaws’ point leader and two-time champion, slowed on the backstretch on the white flag lap. His momentum still carried him to a fourth-place finish.

Kinser, of Bloomington, Ind., had won three World of Outlaw features at the historic half-mile this season including the Knoxville Nationals last month. He and his crew complained that officials should have stopped the race to allow teams to refuel.

Flagman Steve Coon disputed the Kinser claim. “Kinser should have had a full tank of fuel when he started the race,” said Coon. “Nobody else ran out of fuel.”

Green was booed by many of the estimated 6,500 in attendance when he stopped to receive the post-race honors. The booing was apparently because of the collision with Dunkle. Dunkle said afterwards that he doubted Green ran into him deliberately.

Dunkle’s car was hit on the right rear and he was forced to retire. He was credited with a 11th place finish.

Dunkle led the first 10 laps before Kinser took over and set the pace from lap 11 to 23.

Several top drivers were sidelined before and during the feature.

Sammy Swindell of West Memphis, Tenn., the second fastest in qualifying, dropped out in the trophy dash with mechanical problems and called it a night. Mike Brooks of Knoxville, the season point champion here, was sidelined on the seventh lap of the third heat.

Doug Wolfgang of Sioux Falls, S.D., one of the early front-runners in the feature, blew a tire on lap 12 and eventually finished 17th. Jan Opperman of Beaver Crossing, Neb., pulled his Bob Trostle sprinter in early during the main event.