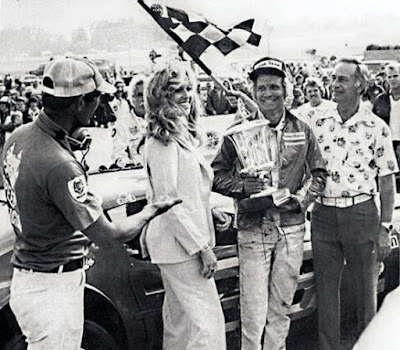 When the checkers waved, it was Detjens one-car-length ahead of Senneker to pull down the top money in the American Speed Association’s World Cup 400 late model race.

Third, one lap behind the two frontrunners, was Dick Trickle of Wisconsin Rapids, Wis., driving relief for fellow townsman Mike Miller in his Mustang. Finishing fourth, after seemingly having the victory in his hip pocket just eight lap from the finish, was Larry Schuler of Lockport, Ill. Fifth, seven laps off the pace was Jerry Makara of Pinckney, Mich.

Holding a half-lap lead and driving as if in cruise control, Schuler’s hopes were dashed on the 391st lap when a gasket let go and he spun out in the fourth turn in his own water. That cost him two spots before he got straightened out.

To compound his woes, Schuler was penalized a lap after completion of the race because of failing to drop to the end of the line under the yellow.

When Schuler spun, Senneker jumped into first with Detjens right on his tail. And when the green came out for the final five circuits, those two tied up in a head-to-head duel.

Senneker led three laps, Detjens put his nose inches ahead as they flashed across the start/finish line to take the white flag and then Detjens pulled away down the backstretch, only to have Senneker roaring back negotiating through the turns.

But Senneker didn’t have quite enough horses to overhaul the Wisconsin chauffeur and Detjens was the winner by a car length to pick up the $7,590 winner’s share of a purse which exceeded $50,000.