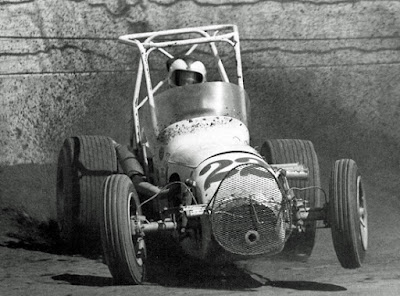 Indianapolis, Ind. (September 11, 1976) - Joe Saldana of Brownsburg, Ind., won the USAC-sanctioned Hoosier Hundred at the Indiana State Fairgrounds Saturday after the race was restarted when the three lead cars were involved in a pileup on the 51st lap that sent Jan Opperman to the hospital.

Johnny Parsons Jr. was fast qualifier and had led all way from start when he, Opperman and Bubby Jones — the three leaders — were involved in the wreck with Spike Gehlhausen and Chuck Gurney.

The leaders were lapping the two slower cars when Parsons spun and was hit in the rear by Opperman. Opperman then spun and flipped into the wall and Jones also spun. Opperman taken to Methodist Hospital unconscious, and doctors said he was in serious condition.

Saldana was running about eighth at time but moved ahead as some drivers completed 52 laps before the race was halted. It was restarted on lap 53 under the yellow flag for a lap before going green, when Saldana took the lead.

Bruce Walkup was in the lead when the race stopped but didn’t restart because of mechanical problems. Parsons restarted in 11th position because he had not finished the 51st lap.