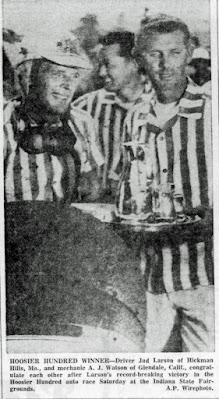 Larson, who sat on the pole, took the lead on the 57th lap when Johnny Thomson, who had led from the start, went out with engine trouble.

“It was a lot of fun, but it was a lot of work,” Larson said from victory lane. Everything worked fine but A.J. Watson, my mechanic, deserves the credit because he kept the car running.”

Although covered from head to toe in dirt, Larson remarked that he didn’t mind because, after all, it was “pay dirt.”

Hard luck dogged out not only Thomson, but also Roger Ward of Los Angeles. Ward was riding in second and had come close to catching Larson several times but on the 77th lap he pulled into the pits with engine trouble, out of the race.

Larson, who had captured a 100-mile race at Du Quoin, Ill., earlier this month, picked up 200 points toward the national championship. That gave him a total of 1,020 in the point race.

A large crowd was on hand in pleasant cool weather to cheer on the veterans of the Indianapolis 500. The 18 men who qualified split a record purse of more than $30,000.