Reading, Penn. (March 31, 1957) – Sunday's USAC-sanctioned Eastern Inaugural Sweepstakes at the Reading Fairgrounds proved to be a happy event.
Not only for the Russ Moyer, the promoter, who was blessed with sunny weather and an estimated 7,500 spectators,  but to Johnny Thomson who snapped two existing records and pocketed $1,456. The prize money was the greatest ever presented to a sprint car winner on a half-mile track in .
Thomson, who now makes his home in , topped the field in the 30-lap feature and set records in time trials and the 10-lap qualifying event.
His 23.94 second mark in qualifying erased the standard of 23.95 seconds set by Jud Larson of Kansas City, Mo., last October while the old 10-lap mark of 4 minutes and 16 seconds set by Jiggs Peters of Plainfield, N.J., in October of 1954, was bettered by Thomson in the first heat.
Thomson, who won the farewell last October, had everything going his way in the feature after shaking Oley’s Tommy Hinnershitz early in the race.
A minor collision on the third lap, involving several drivers including Bob Tattersall and Jim Packard, forced the field to an Indian style restart.
At this point, Thomson pulled ahead of Hinnershitz and was never again threatened. Hinnershitz stayed in the race for eight more laps until he was forced to the pits with a faulty spark plug.
Following Thomson across the finish line was Don Branson of , Charlie Musselman of , Jiggs Peters, Ernie McCoy of , Elmer George of , and Bob Cleburg, also of .

by Lee Ackerman
Knoxville, Iowa - The IMCA Deery Brothers Late Model Series invaded the legendary Knoxville Raceway on September 19, 1994 for what would be the first of four annual September visits to the famed half-mile.


The first of these was held on September 10, 1994 with the running of the “Western Auto Shootout.”  A large field of cars showed up for the event requiring five heats to be ran. Heat race winners were; Todd Cooney, Don Hoffman, Darrell DeFrance, Gary Webb and Kurt Stewart. The B features went to Craig Jacobs and Steve Hennies.


The 26-car, 40-lap feature found Todd Cooney jumping to the head of the pack and leading for six laps before being passed on lap seven by Joe Kosiski. Kosiski would hold the lead for a dozen laps but Gary Webb was closing and after passing Cooney for second, he ran down Kosiski and dove under Kosiski for the lead coming off turn four after a restart.

At the halfway mark Steve Kosiski moved by Joe and into the runner-up spot. Steve Kosiski then started running down Webb despite being slowed at times because of lap traffic. The front runners set a torrid pace, but as the two (Webb and Steve Kosiski) exited turn four to take the white flag, Webb running the low groove started fishtailing and lost some momentum. That was all Kosiski needed as he drove to the high side and went on to take the checkers and a check for $1,500. Webb would finish second, Joe Kosiski third, Hennies fourth and Kevin Cale fifth.


The feature would turn out to be a battle of cars that had started deep in the field having qualified through the B features. Gary Webb had taken the lead but 16th starting Steve Kosiski had patiently worked his way up through the field and after a caution flag on lap 18, Kosiski was in second and mounting a charge on Webb. The two hot shoes battled side by side for several laps before Kosiski took the lead on lap 26.


Webb hung right with Kosiski battling to get the top spot back until he was passed on lap 33 by Jeff Aikey, who had also come out of the B, having finished second to Kosiski in the second B. Aikey then set his sights on Kosiski and the two fought it out for several laps before Aikey took the point on lap 37. Aikey would hold on to win by 20 yards over Rick Wendling, who like Aikey and Kosiski had came out of the B. Steve Kosiski, Gary Webb and Todd Cooney rounded out the top five.


On September 7, 1996, 43 cars would sign in for the Deery Brothers event at Knoxville. The program would be delayed several times by rain showers and would run quite late but in the end, there was no doubt that Jeff Aikey would become a back-to-back winner at the famed half mile.


The defending race champion got the lead early and despite a number of cautions was never seriously challenged, although Gary Webb tried his best through the first half of the 40-lap event. At the half way mark, Webb would roll to a stop on the backstretch with a flat tire. Brian Birkhofer assumed the runner-up spot but was never able to mount a serious challenge to the fleeting Aikey.


With just three laps to go, the yellow waved again, but Aikey was not to be denied and he went on to win at Knoxville for the second year in a row. Birkhofer would finish second, Tommy Elston, Terry Schlipman and Craig Jacobs would round out the top five.


On September 6, 1997 the series returned to Knoxville for their last visit until 2009. Finally, it was veteran Gary Webb’s turn to visit victory lane. Veteran Ron Jackson would grab the lead at the start of the event and lead and led for several laps before Kevin Pittman used the low groove in turn 3 and 4 to take the point.


On lap 14 Deery Brothers series point leader Harry Walker spun exiting turn four and brought out the caution. Two laps latter and Webb would takeover the second spot from Jackson. At lap 21 the yellow waved again. On the restart Webb went to the high side and made the pass of Pittman for the lead. After battling side by side for a few laps, Webb began to pull away and at the checkers held an eight-car length advantage over Pittman. Sonny Smyser, Tom Hearst and Dean Wagner rounded out the top five.


It would be nearly 12 years before the Deery Brothers returned to Knoxville on July 8, 2009 for what has become an annual visit. In 2009 it was Tommy Elston picking up the win, 2010 would see Ray Guss, Jr. take the checkers and in 2011 it was Nate Beuesling winning the event.
No comments: 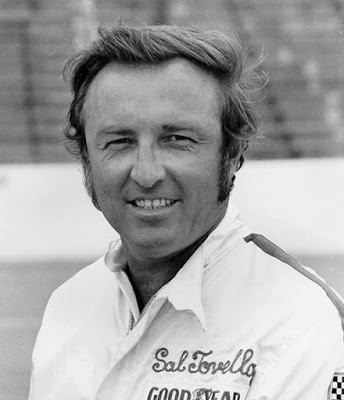 Chicagoland stock car driver Sal Tovella, who made a name for himself on both the local and national racing scenes, passed away on Sunday , March 10 at the age of 90.

A product of Chicago’s north side, Tovella began racing stock cars at Soldier Field around 1950 with Andy Granatelli’s Hurricane Hot Rod Racing Ass’n supervising the racing action which was sometimes staged to provide more thrills. A deliberate crash or, better yet, a rollover provided fans their monies worth.

Tovella scored his first feature race victory at mammoth Chicago arena on June 21, 1952.  Tovella and his battered ’49 Ford won the 25 lapper before a reported crowd of 18,846.

A regular at Soldier Field for many years, Tovella, who even drove an Edsel for a time, captured the track’s late model stock car championship in 1963 after a season-long battle with rival Bob Chapman.  A double-points 100-lap victory on June 29, 1963 helped push Tovella and his ’63 Chevy II to the championship.  Tovella had the distinction of winning the last stock car feature race ever held at Soldier Field, scoring the win on June 9, 1968.

Tovella was a long time competitor on the old United States Auto Club (USAC) stock car circuit.  Tovella was USAC’s rookie-of-the-year in 1963, although he made his first USAC start in 1957.  Tovella garnered his first USAC stock car victory on July 30, 1966 at the Mosport International Raceway in Bowmanville, Ontario.  Tovella piloted his ’65 Plymouth to the win in the second 50-lap heat on the 2.5 mile road course, defeating Billy Foster and Roger Regeth.

One of his most memorable victories was his first USAC win at the famed Milwaukee Mile on Aug. 10, 1975.  Behind the wheel of his ’72 Plymouth, prepared by his brother Fred, Tovella took the checkered flag in the 200-miler ahead of Ramo Stott, Roger McCluskey, Butch Hartman and Larry Moore. During his career, Tovella posted a total of six USAC stock car victories, his last coming in 1980 on the one-mile dirt track at DuQuoin, Ill.

From time to time, Tovella would also try his luck in NASCAR Grand National (today’s Monster Energy NASCAR Cup Series) competition.  Tovella would compete in 14 NASCAR events during his career, dating back to 1956.  Tovella finished 16th in the NASCAR Grand National event held at Soldier Field on July 21, 1956, Fireball Roberts was the winner with Tovella and his ’56 Ford dropping out with brake problems.   Tovella would race in the Daytona 500 five straight years from 1960 through 1964 with a 14th place finish in 1961 in a ’61 Ford being his best Daytona effort.
Tovella had been in the used car business for most of his life operating his car lot – Sal’s Auto Sales for years on Chicago’s Milwaukee Avenue and later in Elmhurst, Ill.

Race fan, writer and historian, John Carollo once wrote, “Sal’s race shop was not at his infamous used car lot on Milwaukee Avenue. It was a few blocks away and in one of the more, shall we say, ‘active’ neighborhoods in the city. I knew the area. My cousin Mike lived nearby and I all but lived there. The neighborhood around Sal’s shop was one where you could fire up a 750 horse Hemi with no mufflers at any hour of the day or night and not bother anyone. It’s not that the shop was out in the sticks; quite the opposite. It was deep in the city, about a block or two from Western Avenue.”
After his driving career was over, Tovella founded the International Racing Association, a sanctioning body for USAC/ARCA-style cars that ran a full schedule of races from 1982 through 1985.

A resident of Addison, Ill., Tovella was inducted into the Illinois Stock Car Hall of Fame in 2012.
No comments: