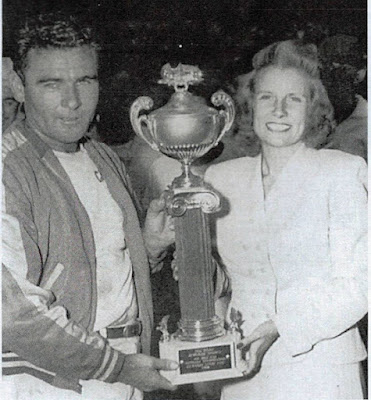 Chuck Stevenson and car owner Bessie Lee Paoli were all smiles after winning the 100-miler at Du Quoin.

Du Quoin, Ill. (September 1, 1952) – Chuck Stevenson of Fresno, Calif., moved into the lead with a third of the race remaining and held it the rest of the way Monday to win the 100-mile national dirt track championship at the Du Quoin State Fair.

Stevenson, driving the blue and white #16 Springfield Welding Smith Special, took over the lead after 67 laps on the one-mile track. Jack McGrath of Glendale, Calif., held the lead until that point, but relinquished it during a tire change.

Stevenson, who finished third in a similar American Auto Association (AAA) sponsored 100-mile test at Detroit on Saturday, was clocked in 1 hour, 7 minutes and 59 seconds.

Sam Hanks, also of Glendale, Calif., finished second with Bill Vukovich of Los Angeles in third. Vukovich was driving the Agajanian #98 Motors Special that Troy Ruttman drove to victory in the Indianapolis 500.