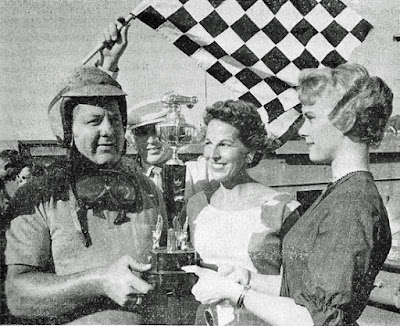 More surprising was the failure of the top two International Motor Contest Association drivers, Pete Folse of Tampa, Fla., and A.J. Shepherd of Gardena, Calif., to finish in the money feature.

Shepherd eliminated himself on the fourth lap when he spun out on the east turn of the half-mile dirt oval.

Folse, the leading driver in IMCA, was never in contention and blamed himself for using the wrong set of tires on the fast and hard track.

“I thought knob tires would dig in on the hard track and I guessed wrong,” Folse said afterwards. “I should have used slick tires. I had the best seat in the house as I watched everyone else pull away from me.”

Ray Duckworth of Anderson, Ind., moved ahead after Shepherd’s spin and set the pace until the 27th lap, one and a half miles from the checkered flag.

Then Barton, running second from the halfway mark, made his move and gunned his Chevrolet past Duckworth and into first place where he stayed.

Anderson settled for second while Jerry Richert of Forest Lake, Minn., was third and Bill Sullivan of Broderick, Calif., was fourth. The time of the race for the 15-miler was 14 minutes and 11.53 seconds.