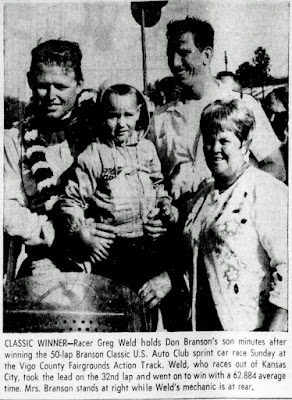 Most painfully injured was Wib Spalding of Granite City, Ill., who suffered minor burns when his car caught fire and spun into the pit area on lap 15 of the feature race. Spaulding’s condition is fair.

Veteran Ralph Liguori of Tampa, Fla., was knocked unconscious when his car hooked the inside guard rail and flipped in the first turn during warmups. He was not seriously hurt and was kept overnight in St. Anthony Hospital for observation.

In the consolation race, Jerry Poland escaped injury when his car flipped over the auto of Jerry Daniels who had spun out in front of Poland.

Weld’s victory helped him move closer to the UAC sprint car point’s leader Rollie Beale, who finished fourth in the feature. Beale has 453.5 points to Weld’s 426.

Bobby Unser finished second in the feature followed by Hal Minyard in third and Sam Sessions in fifth.

The Don Branson Classic was named to honor the late USAC driver who appeared numerous times at the track, won his share of the races and was a hard and popular competitor. Branson died on a California speedway last November.

Beale was the fastest qualifier on the afternoon’s card with a time of 24.71 seconds followed by Weld’s time of 24.74 seconds.