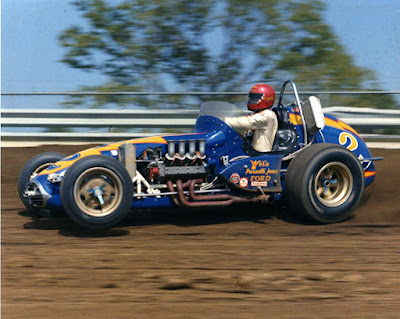 It marked Unser’s eighth visit to victory lane this year on the USAC Championship trail, and his fourth straight dirt track win. He captured the race by over a lap, setting a new 100-mile record for dirt tracks by winning in the time of 1 hour, 1 minute and 12 seconds, smashing the former record of 1 hour, 14 minutes and 37 seconds set by Bobby Grim during a 1958 IMCA sprint car race here.

Unser nursed his Indy-Ford V8 to the finish, as he ran low on fuel with 2 laps to go, and was forced to slow his pace. His only challenger, three-time national champion Mario Andretti, ran out of fuel on the last lap, and coasted to a stop on the backstretch. He had completed enough laps to finish second in his STP Oil Treatment Ford V-8.

Finishing third one lap behind was Larry Dickson followed by Mike Moseley in fourth. USAC newcomer Bentley Warren was scored in fifth place.

Only half of the 18 car field was around to take the checkered flag. Tom Bigelow, Jim Malloy, Greg Weld and Bob Harkey were still on the track when the checkers waved.

Unser showed the 5,500 race fan in attendance that he was going to be the driver to beat. During time trials he smashed thee one-lap record by more than 3 seconds, with a 32.26 second clocking or 111.593 miles per hour.

The record setting ride by Unser made the Sedalia mile the fastest dirt track mile on the USAC circuit. The previous mark, 32.89 seconds, was established at the Springfield Mile by Jim McElreath.

Unser would lead the 18-car field to the green but it was Andretti who would grab the point at the drop of the green flag. On lap 4 Unser made his bid for the lead coming off of turn four, he went to the outside and zipped by Andretti for the top spot. He wouldn’t be headed for the remainder of the race.