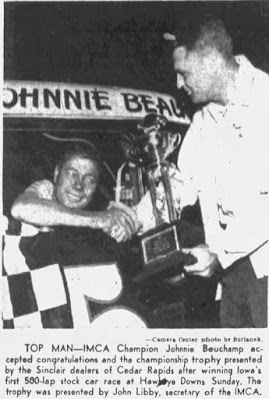 Cedar Rapids, Iowa (September 29, 1957) – Johnny Beauchamp of Harlan, Iowa, raced to top honors Sunday at Hawkeye Downs in the first-ever 500-lap stock car race held in the state of Iowa. The event was sanctioned by the International Motor Contest Association.

Beauchamp lived up to his ranking as IMCA national stock car champion, as he pushed his 1957 Chevrolet to a victory by four laps over runner-up Don White of Keokuk, another IMCA star in a 1957 Ford.

A disappointing crowd of just over 9,000 fans watched Beauchamp survive a hectic first 300 laps and then systematically eliminate all of his chief pursuers.

The system included good, steady driving, combined with a car that was finely tuned, and an alert and able pit crew.

Despite 10 caution flags and three pit stops, Beauchamp negotiated the 250-mile grind in 4 hours 26 minutes and 55.37 seconds for a IMCA national record.

The crowd poured into the infield as Beauchamp accepted the giant Sinclair Power-X trophy, presented by the Cedar Rapids Sinclair dealers.

That was the climax of the biggest day ever of auto racing for the state of Iowa.

It started late, at 1:45 after drivers had been introduced and the field had circled the half-mile track in four preliminary laps, and it ended about 6:15, just in time to avoid darkness.

Tire blowouts were the most common cause of 10 caution flags, but there were no serious injuries. It started on the third lap when Don Oldenberg’s 1957 Buick convertible broke an axle and flipped sensationally on the backstretch. Two other serious accidents came later. George Miller of Cedar Rapids, delayed frequently by a troubled car, spun, and flipped backwards, completely over the on the west turn on lap 141. Bill Brown, one of the leaders on Sunday, was treated for a bruised shoulder after his car leaped the guardrail and crashed through the fence on the same turn, on lap 242.

Two of the pre-race favorites were early-race casualties. Bob Burdick of Omaha was forced out by motor trouble and lap 19 and Robert “Doc” Narber of Cedar Rapids was sidelined on lap 51 with the same issues. 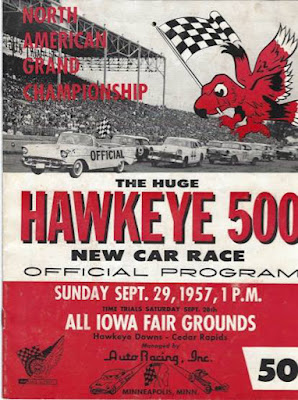