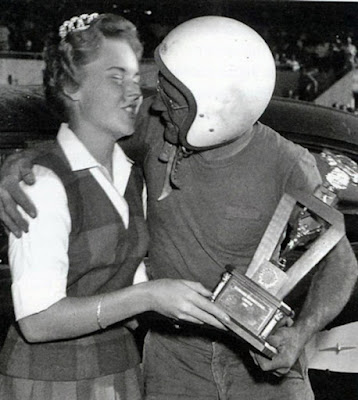 The race was interrupted eight times by various spins, blowouts, and crashes, with the most serious resulting in minor facial injuries to Hal Kent of Richmond, Va., a stuntman who filled in for Bob McElrath of Waterloo, Iowa.

Kent was involved in a three-car pileup on the east turn during the 216th lap when Ken Jahn of Fort Worth, Tex., spun off the curve into the path of Gordon Howard of Marshalltown, Iowa. Kent, unaware of the crash, sped full speed into the area blocked by two cars and a wrecker going to the rescue. Kent crashed head-on into Jahn’s car.

The race was delayed for 18 minutes while the track could be cleared and the field reformed for the closing laps.

Despite the crash that forced Kent from the field, McElrath’s car had enough laps to finish ahead of last place Jack Skadal of Des Moines, who was 54 laps behind the leader.

Picking up third place was Sonny Gross of Quincy, Ill., followed by Tubby Harrison of Topeka, Kan. Gross was five laps back of the winner and Harrison was 15. Finishing fifth, 16 laps back, was Mel Krueger of Anita, one of 11 Iowans entered in the grind.

It wasn’t until brother-in-law Don White of Keokuk dropped out with a broken axle on lap 46 did Derr take command.

White, driving a 1953 Oldsmobile, a part of his loot for winning a 125-mile feature at the Minnesota State Fair earlier this week following his 50-mile sprint triumph here a week ago Sunday, set the top qualifying time of 32.54 seconds to win the pole position.

Dyer caught up with Derr at lap 166 and the rivals battled for the first place through the 181st circuit, when the Shreveport pilot actually nudged ahead by a car length and held the top through the 183rd.

In the stretch, however, Dyer lost his right rear tire and while he was in the pits, Derr stretched his lead to six laps. Then, as Dyer returned to the race, Derr went to the pits for a tire change and was back on the track after losing only two laps of his six-lap cushion.