The Big Cars come to the Shelby County Speedway 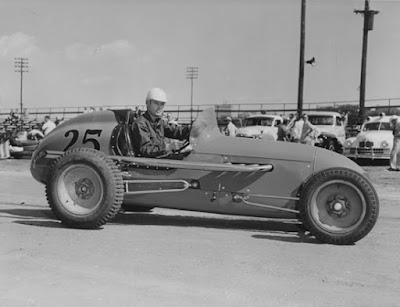 by Lee Ackerman
Omaha, NE - In 1952 and 1953 the Big Cars of the International Motor Contest Association (IMCA) visited the Shelby County Speedway in Harlan, Iowa, during the county fair. Back in those days the IMCA Big Cars would run 85 to 90 races a year mostly at State and County Fairs from to . The races would be sanctioned by the IMCA and use their rules. The races at the Shelby County Fair were under the direction of National Speedways Inc.


On August 22, 1952 they made their first appearance at the Shelby County Speedway and a farmer from , Jimmy Campbell, a relative newcomer to racing was the star of the day. First, set the fastest lap in qualifying aboard his own #25 Offenhauser with a lap around the half mile at 25.45 seconds. Second in qualifying was 1949 500 winner Bill Holland in his Blue Crown Special #29. clipped off a lap of 25.45 seconds.


The first 5-lap heat would be won by Bob Slater of Kansas City, Missouri would late go on to become the 1954 IMCA Champion with Campbell running second. The time of the event was 2 minutes and 14.20 seconds. Holland would take the second 5-lap heat race defeating former Harlan resident Wayne Selzer, who was currently living in Kansas City. Holland’s time was 2 minutes and 21.35 seconds.


Bobby Grim of and one of the nation’s finest drivers would drop out of the second heat on the third lap with mechanical gremlins and would not compete in the remainder of the program. Grim would later driver Hector Honore’s legendary Bardahl Special #2 to four straight IMCA championships before leaving for the United States Auto Club and the Indy 500.


The third heat, also 5 laps, were for cars that had not been in the money in the first 2 heats. That heat went to Phil Mocca of in a car specially built for the series by his brother Peter. Mocca’s Bardahl Circle Deuce clocked in at 2 minutes and 39.35 seconds.


The Australian Pursuit, a race where cars start single file and drop out after being lapped was scheduled for 7 laps but only lasted a couple of laps before Jimmy Wegescheider had lapped the other cars. The days only accident happened in that race as a driver from , O’Dell Young hit the wall after getting caught up in the tow rope from the wrecker.


The 10-lap featured turned out to be quite a race with Campbell coming home barely more than a car length ahead of a closing Holland. Slater, Mocca and Wegescheider rounded out the top 5.


The Big Cars would return to the Shelby County Speedway on August 26, 1953 and the man of the day was Dick Ferguson of aboard the Les King owned K2 Offenhauser. 15 drivers were on hand to compete for a $1,500 purse. started things off by setting fast time of 26.22 seconds with defending race winner right behind at 26.27 seconds.


Keith Saylor in an Offenhauser got the best of Ferguson in heat one taking the heat in 2 minutes and 35.61 seconds. Paul Kamm was third in an Offy. Benny Lighbarger would take heat two in his Studebaker power big car with Clyde Palmer second in his Offy and Andy Anderson third in a time of 1 minutes and 33.09 seconds.


Billy Jimm guided his Offy to the win in heat three followed by Herschel Wagner and Campbell. In a match race Wagner would defeat in 1 minute 31.9 seconds. The semi went to Kenny Gottsschalk followed by Chick Edwards and Ken Higginson. I


It was Ferguson winning the 10-lap main event in 4 minutes and 2.81 seconds with Campbell second and Wagner third. A crowd of 1,700 fans was on hand, the biggest crowd of the fair. The only thing keeping the race from being perfect according to some of the drivers was the dusty conditions of the track.


The IMCA Big Cars would not return to the Shelby County Fairgrounds but in the two years they raced there they provided fans with some fast and exciting racing.
No comments: 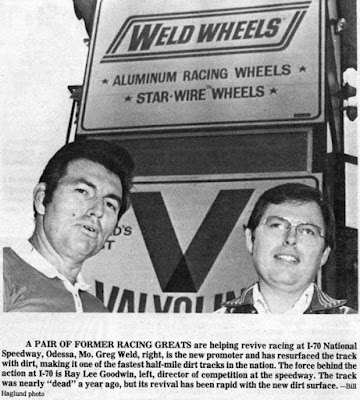 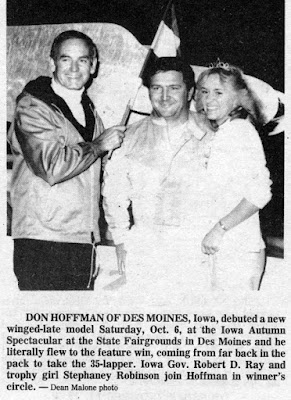 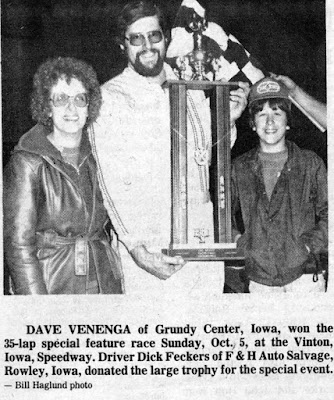 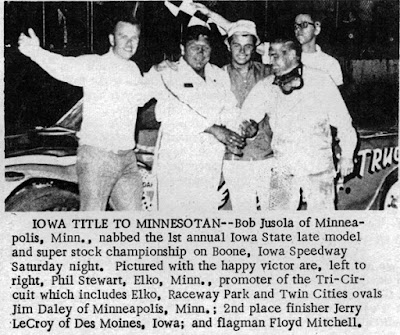 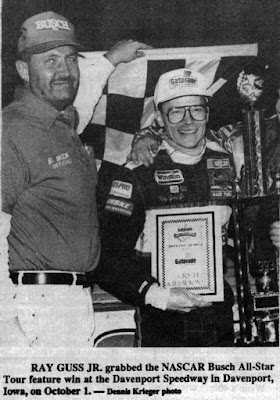