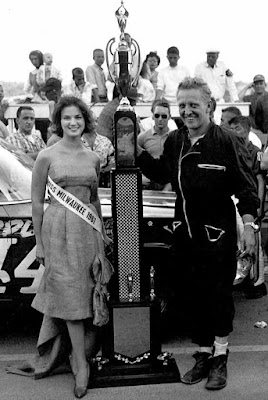 A smiling Whitey Gerken accepts his trophy after winning the 250-miler at Milwaukee.

West Allis, Wis. (September 17, 1961) - William “Whitey” Gerken of Chicago drove a 1961 Chevrolet to victory today in a 250-mile stock car race which finished with so many protests that the first seven cars were ordered torn down for inspection.

Gerken’s margin of victory over Norm Nelson of Racine, Wis., the defending national champion, was 23 seconds. Gerken led the last 12 miles in a race which saw the lead change hands 15 times. He averaged 86.9 miles an hour.

Goldsmith did not start in the car he drove to fifth place. The Michigan driver, who is the leader in this year's national standings, started in a 1961 Pontiac but was forced out early when the car overheated. He took over as relief for Whitey Johnson of Hammond. Ind., and drove the final 120 miles.

The United States Auto Club, which sanctioned the race, ordered the first seven cars dismantled for inspection after wholesale protests from the starting field of 45. The protests charged the engines did not meet USAC specifications.

Other cars to be taken apart are a 1961 Ford driven to sixth place by Elmer Musgrave of Niles, Ill., and a 1960 Pontiac driven by Les Snow of Bloomington, Ill., who was seventh.