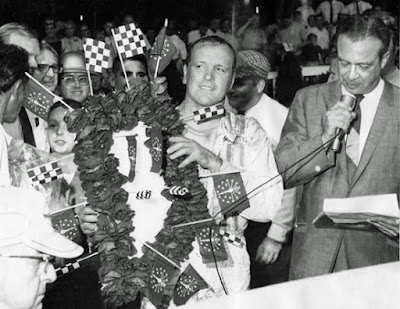 Foyt, who extended his record of United States Auto Club championship circuit victories to 40, was never seriously challenged after the first 25 miles over the Indiana State Fairgrounds dirt track.

Andretti and Bobby Unser, Albuquerque, N. M., rushed away hoping to compete in the Grand Prix of Italy Sunday at Monza. The Americans still hope to compete in the Italian classic although Monza officials said earlier drivers couldn’t compete in two races within 24 hours.

Andretti, who had won the last two Hoosier Hundreds, set a qualifying record of 107.111 miles per hour but never led a lap of the race. Bobby Unser’s brother, Al, led the first 16. Foyt, who had started in 7th position, broke in front to stay on the 17th lap.

Cars of both Unser brothers quit in the first 25 miles of the race. Bobby Unser remained on top of the USAC point standings in spite of his mechanical failure.

Foyt beat Andretti across the finish line on the one-mile track by about a quarter mile.

The speed of 93.296 miles per hour was not a record due to frequent slow-downs for cars spinning on the slick, hard dirt. No vehicles were seriously damaged, and no drivers were hurt.