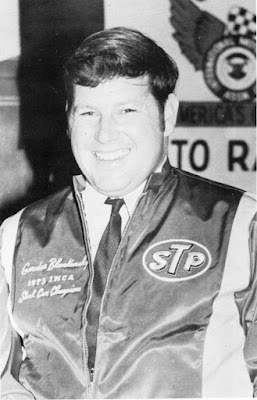 by Lee Ackerman
Omaha, Neb. -  Following the 1971 IMCA Stock Car season, the legendary Ernie Derr of Keokuk, Iowa retired from active competition in the IMCA circuit having won the IMCA Stock Car Championship a record 12 times, including the last seven years in a row.


In 1972, Cedar Rapids, Iowa’s Irv Janey won the Championship and the only driver in the top ten from Keokuk was Gordon Blankenship who finished fourth in points. Keokuk’s domination of the IMCA Stock Car series was apparently over. Well not quite. The 1973 IMCA Stock Car Championship came down to just five points (one position) as two drivers from Keokuk fought it out to the end.
Gordon Blankenship led the IMCA Stock Car point standings from the third race on, but a late season charge by Mike Derr of Keokuk (Ernie’s son) made for an interesting battle to the end and returned drivers from Keokuk once again to the top of the list in IMCA Stock Car racing.
The 1973 IMCA Stock Car season opened as usual at the Louisiana State Fairgrounds in Shreveport with the Pelican 200 on April 1. The one-half mile Fairgrounds track had been paved during the 1969 racing season but still served to not only open the IMCA Stock Car season but the series ended up back at Shreveport in October for the final three races of the season.
Louisiana asphalt drivers dominated the Pelican 200 as Freddie Cook of Monroe set fast time at 22.74 seconds with Bossier City’s Harlan Beene Jr. second quick at 23.04. However, in the race their roles would be reversed as Beene captured the 200 lapper with Cook finishing second. Blankenship staked his claim to the championship with a third, Gary Brooks of Irving, Texas finished fourth and Vern Mondry of Lake Elmo, Minnesota rounded out the top five.
A first in IMCA history occurred at the Pelican 200 as Martha Wideman of Lufkin, Texas made her IMCA debut driving a 1972 Monte Carlo. Mrs. Wideman became the first women to compete on a regular basis in IMCA Stock Car history and raced the series throughout the season finishing tenth in points at the end of the year.
Race two of the season was the “Illowa 101” at the Mississippi Valley Fairgrounds in Davenport, Iowa and it was local, John Connolly of Delhi, Iowa taking home the win. Gary Brooks of Irving, Texas finished second and temporarily led the point race over Blankenship who finished fifth.
Three races in five days quickly changed the landscape in the point’s race. On June 30 at one of the old standby tracks of the IMCA, the Mid America Fair Speedway in Topeka, Kansas, Blankenship quickly took over the point lead by winning the” Kansas 200” in 1 hour 46 minutes 30.50 seconds. Lampe, Missouri’s Ferris Collier threw his hat in the ring for a series championship with a second-place finish. While Gary Brooks had second quick time in qualifying, he was not able to finish in the top ten.
Ferris Collier continued his assault on things by setting fast time, winning his heat, the STP Dash and the 100-lap feature at the Oklahoma State Fairgrounds the next day. Blankenship finished third in the event.
Things got further shook up on July 4th when the cars visited the Iowa State Fairgrounds in Des Moines and defending series champion Irv Janey picked up his first win in the “Iowa 300” by making 300 circuits in 2 hours 19 minutes 14.75 seconds. Mike Derr finished second with Gary Brooks grabbing fifth. Third fast qualifier Blankenship did not finish the event.
After a five-week layoff, the cars headed to the Wisconsin Valley Fair in Wausau where Ferris Collier continued to add pressure to Blankenship by winning a 100-lap feature while local star Roger Regeth of Kimberly, Wisconsin won a 50-lap event as part of a day/night doubleheader on August 12.
Things started to change when the cars returned to the Iowa State Fairgrounds for a 200-lap feature during the Iowa State Fair. Mike Derr started to make his move as he banked $1,025 for winning the 200-lap feature with Blankenship bringing home a third-place finish.
The next day, the series headed to perhaps Mike Derr’s favorite race track, the Missouri State Fairgrounds in Sedalia and Derr did not disappoint. First, on August 19, Derr won the 50-lap feature at Sedalia with Blankenship finishing a distant 10th. 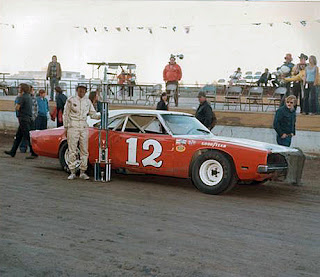 Mike Derr at the Sedalia Mile
Then on August 25, the series returned to Sedalia for a day/night double header but with a wrinkle. The 101-mile event in the afternoon would be on the big mile and Mike Derr liked the mile. Derr won the 101-lap event in 1 hour 11 minutes 15.33 seconds as he defeated short track legend to be Larry Phillips for the win. Blankenship finished seventh.
The evening portion moved back to the half mile and it was Gerald Harrison of Topeka taking the 25-lap feature but Mike Derr was right there in second and once again Blankenship had to settle for a seventh-place finish.
Action continued the next day back in Des Moines as Fred Horn of Marion, Iowa won the 200-lap finale at the Iowa State Fair with a red-hot Mike Derr second and Blankenship fourth. Finishing tenth in that event was the inaugural IMCA Stock Car Champion Eddie Anderson, who won the championship in 1949.
As the season started to wind down, the series made their annual visit to the world’s largest county fair in Spencer, Iowa and Kennard, Nebraska’s Bill Wrich won a rain-shortened event with Derr third and Blankenship fifth. The next day action moved to the Nebraska State Fair in Lincoln where local Joe Wade of Lincoln won the feature with Mike Derr taking fourth and Blankenship registered a DNF.
There were only two more events on dirt at Oklahoma City before the season ending events back at Shreveport and Mike Derr was still on the move. On September 29, Derr won the 25-lap feature over Ferris Collier with Blankenship scoring a seventh-place finish. The next day, Super Joe Wallace of Kansas City won the 100-lap main with Derr grabbing second, Blankenship third and Collier fifth.
Heading back to Shreveport the scorecard read; Blankenship 1,635, Mike Derr 1,495 and Ferris Collier 1,434.
If there is one conclusion that can be reached when reviewing the three races held on the paved half-mile of the Louisiana State Fairgrounds, it’s the Gordon Blankenship came terribly close to losing the championship.
The first event was held on September 20 and Vance Cook of Jonesboro, Arkansas came away with the 50-lap feature with Mike Derr seventh and Ferris Collier tenth.
When action returned the following day, Collier made a bid to overtake the competition as he posted a big win on the pavement taking the 100-lap feature, but Mike Derr was right there in third position with Blankenship once again missing the top ten.
On September 28, the season came to an end the same way it started with Harlan Beene, Jr. winning the 150-lap finale, but with a little luck as four other leaders fell by the wayside. Mike Derr finished fifth and missed tying for the championship by just five points.
The 1973 IMCA Stock Car season had its ups and down for several drivers but it was an early lead and hanging on that won Gordon Blankenship the Championship. An early start or a single position improvement in several races could have secured the championship for Mike Derr.
Asked about the 1973 season and beating Mike Derr by just five points at a Keokuk reunion years later, Gordon Blankenship commented “I can honestly say that I wish we could have tied for the title.”
No comments: