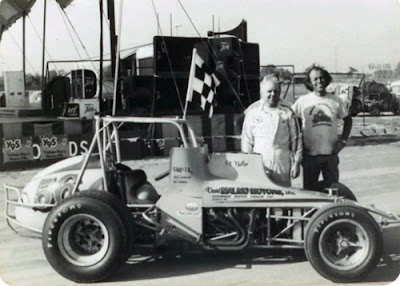 Utz, starting in the pole position, led the entire race without a serious challenge to his lead.

The main event was marred by two major accidents which forced many of the top cars out of the feature race.

The first mishap involved Bill Robison of Topeka, Kan. Coming down the straightaway in front of the grandstand his wheel came across another car, throwing Robison over and over along the guard rail and disintegrating his car.

Robison, the fourth fastest qualifier in Monday's time trials, was being held at Lincoln General Hospital for observation after the race and was listed in fair condition.

No one was seriously injured, although Johnson, of Newton, Iowa, had his car torn in two when it went over the guard rail.

Two drivers, Droud and Blackett, were able to return to action and Blackett eventually finished second in the main event.

Because no laps had been completed after the two mishaps, a new lineup was drawn up. In the revised start, Utz was moved to the pole slot.

“It (the accidents) didn’t bother me much,” said Utz. “Of course, you don't like to see anybody injured in racing, but you see it at every race you go. It’s just part of the sport.”

Utz spent most of the day trying to find the right combination to go with the changing track.

“For the feature we went to a higher gear and diamond tires,” he said. “There wasn’t any racing up high because most of the moisture was gone up higher.”

With just five IMCA races left, every win is especially crucial to Utz because of the point standings.

“Any time I finish ahead of Kirkpatrick, it’s great,” said Utz. “I’d like to win the point standings. I tried to win last year but we weren’t able to race in Florida and missing those five races down there really cost us. We ended up third.”

With the win, Utz ended up with two firsts and a second in the three races, by far the best showing of any the drivers.

Ron Shuman, of Tempe, Ariz., driving the car usually chauffeured by Lonnie Jensen, just missed a clean sweep of the trophy dashes when he was nipped at the finish line by Edd French of Waco, Tex.