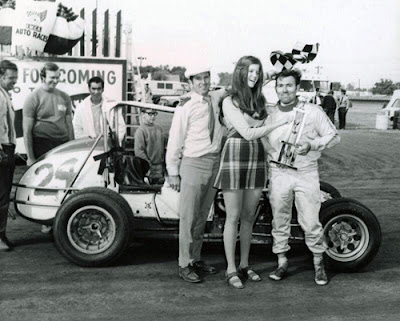 For the Kansas City chauffeur, it was his first career IMCA sprint car victory as he nipped Jerry Blundy of Galesburg, Ill., second-place finisher and Eddie Leavitt of Kearney, Mo., third-place finisher.

Rounding out the top five were Jerry Richert of Forest Lake, Minn., and Joe Saldana of Lincoln, Neb.

Blundy and Jay Woodside of Kansas City tangled in the first heat, flipping the car driven by the Missourian. Woodside escaped injury while Leavitt went on to win.

Little Joe Saldana set a record as he won fast qualifying time, touring the half-mile dirt oval in 23.40 seconds, to erase a 13-year-old mark set by Bobby Grim of 24.14 seconds back in 1957.