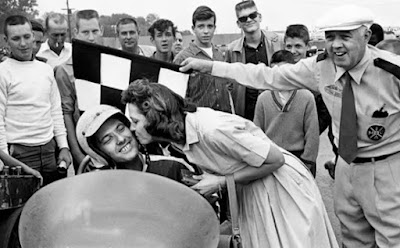 Going into the race Folse held a 30-point lead for national honors and White managed to whittle 20 points of this margin with only three races remaining on the circuit.

Blundy traveled 20 laps in in a record time for IMCA. His average speed of 85.308 miles per hour broke the old mark of 84.096 set by White here last year.

Folse, who has never done well in Nashville, gave his best local racing performance, apparently racing for his life. He came up with the fastest time in time trials, averaging 85 miles per hour, slightly off White’s record of 85.88 miles per hour.

The feature had to be restarted before one lap was completed. Tom McLellan spun on the backstretch coming off the number two turn. While he was sitting on the track, Al Williams came barreling into him. Williams went over the front end of the car and somersaulted down the track. Miraculously, no one was injured.

A packed house was on hand for the six-event program which began with Harry Kern of St. Paul, Minn., edging White in the first heat. Twenty-six cars were in action.