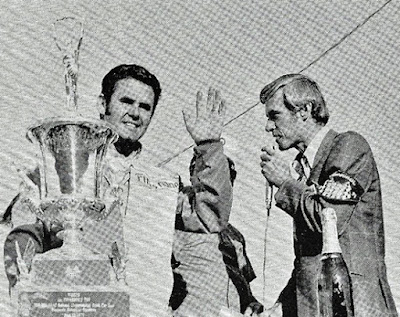 Governor's Cup winner Al Unser waves to the crowd as announcer Jack Baker describes how he did it. - Gary Schmidt Photo

West Allis, Wis. (September 12, 1971) - Al Unser of Albuquerque, N.M., gave up the lead to make a fuel stop on the final caution flag of the race Sunday then took it back when his brother Bobby ran out of the same precious stuff four laps from the finish of the 250-miIe Governor’s Cup stock car race.

Al had qualified for the pole at 106.657 miles per hour, but his average race-winning speed was only 91.935 mph as eight yellow flags slowed the pace but kept the race close for the 20,488 spectators.

Caution flags had flown three times during 24 of the first 38 laps but as the 40-car starting field thinned so did the mishaps. It looked as if the final 90 laps around the one-mile State Fair Park track would be accident free until flames started spewing from beneath Bill Nelson’s 1969 Dodge in the pit straight of the 232nd lap.

Three laps later, Al surrendered a 19-second lead over Bobby to pull his 1971 Ford Torino in for an insurance shot of gas. Bobby, who had previously pitted the same time Al did around the 165th lap, decided he could make it and drove on past in his 1971 Plymouth Roadrunner.

Al rejoined the pack almost immediately and tore around the track until he was within about 10 car lengths of his brother and holding behind the pace car. When the green finally fell 11 miles from finish, Al gained slowly, but wouldn’t have caught his older brother had not Bobby sputtered down the grandstand straight with an empty gas tank on the 247th lap.

Bobby managed to get back around to the pits for a slosh of fuel and out on the track in time to finish third. Roger McCluskey of Tucson, Ariz., was second in his 1970 Plymouth Superbird, his teammate Norm Nelson of Racine, Wis., was fourth in a ’70 Superbird. Verlin Eaker of Cedar Rapids, Iowa, was fifth in a 1969 Dodge Daytona.

If Bobby had stopped for fuel during the yellow, he would undoubtedly have lost anyway, but he said after the race he didn’t think he would run out.

“If I’d have known I was that low on fuel I would have saved some,” he said, meaning he wouldn’t have pushed his car as hard. “My mechanics told me I had plenty, so I didn’t come in.”